Skip to content
This post contains affiliate links. As an Amazon associate, I earn from qualifying purchases.
Dream of having the confidence to travel solo?
Read my book Get Lost to find out how! 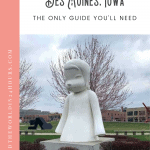 Greetings Internet Stranger! It’s often said that Americans don’t get enough history in schools. We have a huge country and our citizens literally come from every other nation in the world, so it’s hard to cram everyone’s history into just a few years of schooling. But one excellent way to learn American history is to visit the state capitals. And why not start with the best Things to See in Des Moines.

If you’re looking for an edu-taining American trip, Des Moines is the place for you! You can learn all about Native Americans, pioneers, The Music Man, and Iowa’s greatest export: zombies. Don’t believe me? Soon you will!

I highly recommend the Staybridge Suites Des Moines Downtown. It has an extremely convenient location, a fitness center, and a friendly staff. Plus, not only is breakfast included, it’s one of the only hotels I’ve stayed at that includes a light dinner for free on some nights. That’s extremely convenient if you’re in Des Moines on a Monday when a lot of restaurants will be closed.

If you’re looking for a great deal on the Staybridge Suites, just click here. And if you’d rather find a different hotel in Des Moines, there are many fantastic choices here.

The Iowa state capitol and the Des Moines capitol building are two different names for the exact same building. I’m just trying to cover all my bases here, Internet Strangers! Leave no Iowa history nerd behind! And no list of the Best Things to See in Des Moines is complete without them.

Like pretty much every other state capitol building I have visited, the Des Moines capitol building is free to visit. If you are a group of over 10 people, you should make a reservation on the website. If not, just show up and take a self-guided tour. If you’re lucky, like I was, you’ll be allowed to join in on a tour with a school group. But whether your tour is with a guide or self-guided, you’ll learn more than…

1) What’s the Coolest Thing in the Des Moines capitol building?

The Des Moines capitol building is surprisingly lovely, so there’s plenty to see inside. Don’t forget to look up so you can see the stunning dome. But I suggest asking to see the Iowa Constitution. According to one of the employees, it’s the third Constitution.

2) What Do People Do in the Des Moines Capitol?

They run the state of Iowa with an iron fist, naturally. Like many smaller states, people-wise, the state government isn’t in session for very long. The Iowa State House of Representatives is only in session from January through April because of the farm season. Those government officials need to hurry back so they can build a ghost baseball field in their backyard before summer arrives. (If you build it, he will come.)

If you’re looking to rake in the big bucks, working in the Iowa government might not be for you. According to our docent, the salary is only 26,000 dollars a year. But keep in mind that it’s a part-time job, so that might not be so unreasonable.

3) Where Can I Eat Near the Des Moines Capitol Building?

I’m shocked that you’re thinking of your tummy instead of the Very Serious Matter of Iowa State government, Internet Stranger. But I will indulge you. Before you tour the Iowa capitol, stop in for breakfast at the Scenic Route Bakery, just a short walk away. I recommend their chocolate croissant and the Honeybee Latte, made with real honey.

For lunch, step into the pride and joy of Des Moines: Zombie Burger. This is where every zombie who’s any zombie in Des Moines comes to eat. I suggest the Walking Ched burger because the bun is made out of fried mac and cheese, which is as authentically Midwestern as it gets. Just don’t try to pick up the bun with your hands because you’ll get coated in fried cheese.

Chase the burger with the highly instagrammable unicorn milkshake made with enough sugary cereal to satisfy the crankiest inner child.

Just be on the lookout for zombie attacks in the bathroom!

We’ve spent the morning learning about Iowa’s government. Now we’re going to finding the Best Things to See in Des Moines and dive deep into Iowa’s history at the State Historical Museum of Iowa. (You can get the info about their opening hours and prices here.) You can easily spend a few hours here learning much more than…

1) Are Any Famous People From Iowa?

There are many famous people from Iowa, including “American Gothic” painter Grant Wood and John Wayne. But I want to draw your attention to African-American Iowan Alexander Clark. He was active in politics both before and after the Civil War, and he formed Iowa’s first African-American regiment, which obviously fought for the Union.

2) What About Iowa Movies?

Plenty of movies have been set in Iowa, including the Rogers and Hammerstein musical State Fair. But there are only two real contenders for the Iowa movie throne: The Music Man and Field of Dreams. It’s hard to decide which should win!

The Music Man was the masterpiece of Iowa boy Meredith Willson, who was born in Mason City, Iowa. The show couldn’t be more of a tribute to small-town Iowa life, even though Willson has lots of fun teasing the locals. The Music Man even has an entire song called “Iowa Stubborn”. One of the lyrics is, “You really got to give Iowa a try!” And the show remains popular. It’s coming to Broadway soon, starring Hugh Jackman and Younger‘s Sutton Foster.

But Field of Dreams, which is about baseball playing zombies, may be the ultimate Iowa movie. It even has the line, “Is this heaven? No, it’s Iowa”. But it does lose some points because the author was not from Iowa. He was…Canadian. That’s basically the Iowa of countries, though.

3) How did Iowa Become a State?

So first of all, the State Historical Museum of Iowa gets massive props from me for naming their exhibit on the Iowa territory “You Gotta Know the Territory” because that’s a line from The Music Man. Very meta!

Iowa became a state on December 28, 1846, but it has a long history before that. Before Europeans arrived in Iowa, it was inhabited by the Meskwaki tribe. (The Meskwaki purchased land in Tama, Iowa in the 1850s and they still live there today.) You can see Meskwaki artifacts like blankets and feast bowls in the exhibit. Unless you are from Iowa, it’s unlikely you’d have the chance to see these treasures back home.

If it’s a lovely afternoon in Des Moines, head to Pappajohn Sculpture Park. Admission is completely free, and you can see works from Yayoi Kusama…

As well as more of Des Moines’s terrifying zombie population!

If the weather’s not so nice, or you’re just feeling like a thirsty bitch, head to Peace Tree, one of Des Moines’s excellent craft breweries. If you’re looking for something a little funky, get their OG orange sour beer. But they have yummy normcore beers like lagers and IPAs as well.

You know an American city has really arrived when it has two things: a craft brewery and a restaurant that serves Craft Cocktails and Small Plates. (I call them CraCoSmaPla restaurants.) And in Des Moines, if you want CraCoSmaPla, you book a seat at Alba. In the 1980s, if you’d told someone you could get a great cocktail in Des Moines made with cynar, a bitter Italian liqueur, they would not have believed you.

I suggest getting 3 small plates per person. Start with deviled eggs, that church picnic classic. These were kicked up a notch of class with grana padano twill. (Grana padano is the less famous cousin to Parmesan.)

If I’m ordering small plates, I always make sure at least one is light and vegetable-based, to avoid scurvy. This Brussels sprout salad had bacon in it, so I’m not sure how healthy it was, but I’m pretty sure the sprouts cancel out the fat in the bacon.

Even at a small plate restaurant, it’s nice to get one dish that’s more like a main course. I selected a half-portion of one of their specialties, gnocchi. (If you’re Josh from Younger and you’re reading this blog, it’s pronounced nyo-key. That’s my second Younger reference of the night!)

This gnocchi was served with roast vegetables, lemon crema, and prawns. They were delicious, but I always wonder how they get fresh prawns to a landlocked state like Iowa. Do they Fed Ex it?

That’s the Best Things to See in Des Moines

What do you think are the Best Things to See in Des Moines? Are you stoked to book your hotel room in Des Moines right now? And why are there so many zombies in Iowa’s capital? Please leave your thoughts below!

Greetings, Internet Stranger, and welcome to the best things to do in Greenwich Village! The Village is one of the coolest and most beautiful neighborhoods in New York City. Do you like exploring...

Greetings, Internet Stranger, and welcome to the best things to do in Midtown NYC! Are you visiting New York City for the first time? Are you feeling a little overwhelmed by all the things to do in...