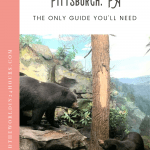 Greetings Internet Stranger and welcome to a perfect one day in Pittsburgh itinerary. People sometimes think of Pittsburgh as Philadelphia’s rough-hewn cousin. Nothing could be further from the true! Pittsburgh is a delightful city full of culture, great eats, great booze, and so much more.

On this perfect one day in Pittsburgh itinerary, which will work rain or shine, we’re going to see best that the Steel City has to offer. And it all starts with the man, the myth, the legend, the Carnegie.

I suggest staying right in Downtown Pittsburgh because you’ll be right in the middle of the action and easily able to walk to many of the fine restaurants and attractions. That’s why I recommend staying at the Drury Plaza Hotel in Pittsburgh. The staff is extremely friendly, the price was perfect given the amazing location, and a free breakfast buffet was included every morning. I would definitely stay here again the next time I am in Pittsburgh.

If you’re looking for a great deal on this hotel, just click here. And if you’d rather explore deals on tons of other hotels in Pittsburgh, click here.

Pittsburgh is hot in the summer, so don’t forget the sunscreen. My favorite is the Neutrogena spray bottle because it’s so easy to apply. And as a solo traveler, I can actually use it myself on my own back. I just put it in my purse and re-apply throughout the day.

One of the most convenient things about Pittsburgh is that its natural history museum and its art museum are basically in the same building. In my hometown of NYC, you have to walk across a whole park to get from the Metropolitan Museum of Art to the American Museum of Natural History. The Carnegie Museum of Natural History isn’t quite as big as the AMNH, but it’s still an impressive and interesting place to spend a morning. Allow me to share why with…

The coolest exhibit in this or pretty much any Natural History Museum has to be the dinosaur section. There are many impressive skeletons in the Carnegie like a T Rex and a Stegosaurus. But the most unique has to be the Diplodocus carnegii. How many museums have a dinosaur fossil that has the same name as the museum itself? And it’s all thanks to one Andrew Carnegie.

Andrew Carnegie, who never met an expensive object he didn’t like, acquired his dinosaur collection as part of the Second Bone Wars, the period during which major museums in the US attempted to acquire as many dinosaur bones as they possibly could. Carnegie had the money and willpower to do quite well in these wars. He claimed to be acquiring the bones for Pittsburgh, but I think at least a little bit of his ego was involved as well. (Also museum drama has gotten way less interesting since the turn of the 20th century. Bring on the Third Bone Wars, please!)

Anything to do with animals is the cutest, and I was very partial to these bears! They are very local bears because they are from the Allegheny National Forest, which is the only national forest in Pennsylvania. So suck it, Philadelphia! So what if you have the Liberty Bell and the Rocky stairs?

I was also extremely partial to this recreation of the extinct dodo bird that is over 100 years old. I find it hard to believe dodos ever really existed, but they sure are cute! (There are conspiracy theories about so many things, why aren’t there more conspiracy theories denying that dodos existed? We have a lot more hard evidence for the moon landing than we do for dodos.)

3) Where’s the History in the Natural History Museum?

Glad you asked! There’s a large section dedicated to Native American history. Because Native American history and culture is such a vast and complicated topic, the Museum of Natural History focuses on five groups: Iroquois, Tlingit, Hopi, Lakota, and the Inuit. There are many impressive artworks on display, as well as information about historical events like the Battle of the Little Bighorn. I particularly recommend seeing the Hopi katsinas. The exhibit provides a detailed explanation of why the katsinas are so important to the Hopi.

Since we’re staying in the same building to go from one museum to another, let’s continue staying inside for our lunch! The Cafe Carnegie is a surprisingly tasty museum cafe–I recommend the light and satisfying chicken with red wine vinaigrette.

And if you’re looking for a drink, try the delicious Bloody Mary. Everyone knows fine art goes better with booze. That’s just science.

On to the art! If a docent tour is available when you’re at the Carnegie, I strongly suggest taking it. They’re free and you’ll learn so many fun facts. For example, you’ll learn that this painting above was acquired by the museum because Rembrandt’s were out of its price range. So Frans Hals was the best Dutch Old Master they could afford. Fortunately, Frans Hals is a complete delight, and so is this painting.

The subject is apparently an entertainer who was famous for heckling his hecklers. The Dutch words in the painting translate to “Who wants it?” which I guess is like saying “Come and get it” to his audience of hecklers. This dude would fit right in in New York City. He is welcome to move here anytime. I mean, he’s very dead, but his ghost could move here and become the first successful stand-up comic from beyond the grave.

3) The Wreck by Winslow Homer

(In case you’re curious about the second painting acquired by the museum, it was by another American painter, Whistler. But no one gives prizes for second place, unless you count silver medals and whatnot.) You can tell how important “The Wreck” is to the museum because the wall behind is painted to pick up on the blue in the painting. My docent says the museum matches all the gallery walls to prominent works. Look for that as you walk through!

4) “A Peasant” by Jules Bastien-Lepage

This painting above, called “A Peasant”, was probably responsible for my finest moment at a museum because I told the docent it reminded me of a painting of Joan of Arc we have in the Met, and the docent said it was by the same artist, Jules Bastien-Lepage. But I think you can see the similarities if you look at the Joan of Arc painting next to “A Peasant”.

After learning that I was from NYC, the docent took me to a painting of the 10th Street Galleries, which were the place to be in the art scene of NY in the 50s and 60s. See! It pays to talk to your docent. You never know what cool finds they’ll be able to show you.

5) The Chariot of Aurora

And now for something completely different…a giant Arc Deco panel taken from the Normandie, a VFO (Very Fancy Oceanliner) from the 1930s. My docent said that the galleries try to have a work from every major period, and this one represents Art Deco. Art Deco is one of my favorite decorative styles. Just look at all that pointiness and shininess! It makes me thing of Miss Hannigan telling Little Orphan Annie that she wants her to make the floor shine like the top of the Chrysler Building.

My docent told me that the different figures in the corners represent the four winds and possibly the four seasons as well. Now, if I were in charge of a VFO, I would definitely want the weather to be on our side, so this is just smart thinking on the part of those guys who made the Normandie.

You’ll probably want a break after a full day of museuming, so before dinner, head over to Wigle Whiskey. They have an excellent distillery on Smallman Street where you can fully appreciate their yummy small-batch booze. (You can also buy a bottle or three to take home with you, and I did.) There’s a long whiskey tradition in the Eastern Pennsylvania/West Virginia area, so it’s very appropriate to stop here.

I suggest getting a cocktail while you stop at the distillery. I ordered a Monhatten, which is just a Manhattan made with Wigle Whiskey’s Pennsylvania Rye Whiskey. It was super tasty and the flavors of that small-batch booze really came through. There was an odd dude having a drink there who kept trying to chat me up, but I kind of ignored him. Maybe he was just being friendly, but I’ve met too many creepers, so I have to assume every strange man I meet is a serial killer planning on wearing my skin. Sorry, dudes!

It’s that time in our one day in Pittsburgh itinerary for dinner, and I know just the perfect spot. Whitfield manages to feel like a cozy neighborhood joint even though it’s a restaurant in the hotel. The food is comforting yet elegant, which is such a hard balance to find. Start on the more elegant side with the steak tartare–the quality of the meat was flawless, which is important since it’s raw steak.

Then go for something heartier for the main course, like the duck with peanuts, fried garlic, and potatoes. This was almost like a cross between a chicken curry and a simple roast duck, and I must say it was very morish, which means that I kept wanting to eat more of it.

What’s homier and more satisfying than chocolate cake? But this chocolate cake was fanci-fied and light-as-pixie dust because it was made with olive oil. On top of that, it had a rich cashew butter and cashew crunch, so it was almost that classic peanut butter and chocolate combo, but more surprising.

That’s a One Day in Pittsburgh Itinerary!

What would you do with a one day in Pittsburgh itinerary? Did the dodo ever really exist? And is the world ready for the Third Bone Wars? Please leave your thoughts below!

Note: If you want to know how I put my travel itineraries together, just click here. Keep in mind that while each article is about how to spend 24 hours in a place, that doesn’t mean you should ONLY have a one day in Pittsburgh itinerary.

link to 1 Perfect One Day in Cardiff Itinerary

Greetings Internet Stranger and welcome to a perfect one day in Cardiff Itinerary. Regular readers of this blog know that I love to wander into controversy. Which Scandinavian tasting menu is the...

Continue Reading
link to A Perfect 24 Hours in Cardiff, Wales