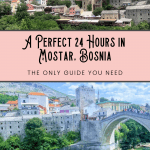 Greetings Internet Stranger and welcome to this Mostar day trip ending in Dubrovnik. I’m so happy to be your guide for this excursion. Dubrovnik, Croatia, and Mostar, Bosnia and Herzegovina, are two of the loveliest places in all of Europe. Lucky us that we get to see both in one day!

I am utterly unable to drive, and the public transportation in this part of the world isn’t always “functioning”. So I chose to use a company called My Day Trip to hire a private driver to take me from my previous destination of Sarajevo to Dubrovnik. That way we could enjoy our Mostar day trip on the way. I loved My Day Trip, but you could just as easily see all these places with a car of your own. Totally up to you!

We’ll be ending our Mostar Day trip in Dubrovnik, and have I got a wonderful place to stay. How would you like to rest your head in an adorable family-run establishment with excellent views of Dubrovnik, a pool, free drinks on the patio, and a delicious breakfast spread every morning? Then the Villa Klaic is just the place for you! I can’t imagine staying anywhere else in Dubrovnik.

If you’re looking for a great deal on the Villa Klaic, click here. And if you’d rather explore deals on thousands of other hotels in Dubrovnik, click here.

You’ll need comfy shoes for all the walking we’re going to do today on our Mostar day trip. If it’s summertime, I love my special pink Birkenstocks. These aren’t your grandpappy’s Birkenstocks anymore. They come in every shade, and I always get compliments on my electric magenta shoes.

The Balkans are hot in the summer, so don’t forget the sunscreen. My favorite is the Neutrogena spray bottle because it’s so easy to apply. And as a solo traveler, I can actually use it myself on my own back. I just put it in my purse and re-apply throughout the day.

Finally, if you’re American, you need a universal adapter if you’re going to plug in electronics. European electrical outlets don’t work with American plugs. I suggest the NEWVANGA travel adapter. It’s usable with any electrical outlet in the world, so you won’t need to keep buying new adapters. I always carry two with me, just in case something happens to one.

Since we are starting our trip in Sarajevo, let’s take the morning to explore some of the tragic history of that city. Mostar is so different from Sarajevo that it’s interesting to compare the two, even if they are located in the same country. The Sarajevo War Tunnel, which is also sometimes called the Tunnel of Hope, is a real tunnel that was used by Bosnians during the Siege of Sarajevo. For almost three years, it was the only connection Sarajevo had with the outside world.

I am loathe to say anything connected with this war tunnel is “fun”. So instead I will give you…

The War Tunnel, as I mentioned, was dug by Bosnians during the Siege of Sarajevo. Things got very complicated in the former country of Yugoslavia after the end of Communism, and the Bosniaks wished to form their own country. The Bosnian Serbs responded with extreme prejudice and began to besiege the Bosnian city of Sarajevo. This siege lasted from 1992-1996. It’s insane to think a modern siege could last so long and the outside world would do almost nothing about a people being systematically murdered and starved.

But the Bosniaks dug this war tunnel using only tools they had lying around and homemade candles. The tunnel had to be dug at night so they wouldn’t be spotted. For years, this was the only way out of Sarajevo.

As I said, I recommend going here with My Day Trip in between Sarajevo and Dubrovnik. But there are guided tours that leave from Sarajevo, and you can also take public transportation (the trolley) from the city of Sarajevo to the War Tunnel. It’s only 12 km from the city center.

As for the price of admission, it’s not very expensive–only 10 Bosnian marks for an adult. But there’s no guarantee that they take cards or will have change, so I recommend bringing small bills with you. Don’t say I didn’t warn you, Internet Stranger!

3) What is there to see at the War Tunnel?

There are basically three parts to the exhibit. There is a short film about the Siege of Sarajevo. (If you are short on time, you can skip this part because there isn’t really sound.) Then there is a gallery with photographs of the Siege of Sarajevo. I was most interested in a series of photos about young women during the siege pretending to hold a “Miss Sarajevo” pageant, but really it was a protest about how the outside world wasn’t doing enough to help Sarajevo.

The best part of the exhibit is getting to go through the Tunnel itself. Only a short section is open to tourists, but you can still imagine what it must have been like to be one of the Bosniaks use this tunnel to bravely make contact with the outside world. I’m not sure I would have had the courage. Do you think you would have?

And here we arrive at the main course: Mostar! You’ll either need to be using My Day Trip or have a car of your own to get here from the Sarajevo War Tunnel. I don’t suggest trying to get here by public transport. I do suggest leaving plenty of time to explore this lovely Ottoman-era city so that you can fully enjoy…

The first thing you’ll see when you arrive at Mostar are tons of shops selling everything from handmade glassware to plastic keychains. Mostar thrives on tourism, so the shopkeepers will be enthusiastic about calling you in to try their wares. Just keep in mind that many of them don’t take credit cards, so bring Bosnian currency if you want to shop til you drop. I got a better of metal earrings because I need to buy earrings in every city I visit. That’s just science.

At this point on your Mostar Day Trip, you’re going to be feeling peckish. I recommend stopping for lunch at Restaurant Lagero. The staff is supes friendly and speaks great English, the food is tasty, but most importantly they have a terrace with stunning views of the Old Bridge, the most famous landmark in Mostar. You can eat your meal in peace and enjoy the scenery away from the massive crowds!

My lunch was the half meat and half chicken platter along with some warm pita bread that tasted like it was fresh from the oven of the Ottoman sultan’s finest chef. But even though there’s a stereotype that Bosnians love meat so much that they consider chicken a vegetable, you can find vegetarian options on the menu as well.

So first off, check out this picture! I took it from my table at Restaurant Lagero. Was I lying about the view? Is it not spectacular? Never doubt me again, Internet Stranger!

The Old Bridge, like many things in Bosnia, is both inspiring and tragic. It was originally built during the Ottoman Empire in the 16th century, but it was destroyed in the 1990s during the Bosnian War. Fortunately the international community came together to pay for its reconstruction. Now all can enjoy the wonders of the Old Bridge.

One final thing to keep a look out for when you cross the Old Bridge is the cliff divers. Young men earn money by having people pay them to jump off the bridge into the frigid and dangerous waters below. I was told by my driver that sometimes men even die by making this jump. (Perhaps there are also women who attempt this task, but I didn’t see any.) I beg of you to not attempt this jump. Think of me and how sad I would feel if you crushed your skull after reading my blog!!!

I do love Mostar and Gelato, but I <3 Gelato is actually the name of my favorite ice cream place in Mostar. It’s the perfect accompaniment for Mostar’s adorable winding streets and historic architecture. I suggest the creamy Toffifay flavor because it is literally the only place I have ever seen sell Toffifay ice cream. (Toffifay is a candy made from hazelnuts, chocolate, and caramel, for those sad folks not in the know.

The best thing to do on your Mostar day trip is just wander around and enjoy how pretty it is. There are several mosques, and while you might not have time to go inside, you’ll definitely have time to admire their exteriors. Don’t miss the Karadoz Bey Mosque with its beautiful blue roof. It’s the biggest mosque in the area.

As you walk around the city, you’ll see monuments and graves for people who were killed in the Bosnian War. Some were so young–the person in the grave above was less than ten years old.

This corner brings together both the historic and the modern Bosnia. The Ottoman buildings are a lot more enjoyable than the tragic tales of war–but I try to remember them both.

We’re ending our Mostar day trip in Dubrovnik, and you’ll probably be too tired for an elaborate meal. So after checking into the Villa Klaic, I suggest getting a yummy wine and cheese plate at Tavulin. It’s located right in Old Dubrovnik, so you’ll be able to get your first glimpse of this stunning place while feasting on Croatian wines, hams, and cheeses. I live in New York City, which is a fairly large town, and we don’t often see these delicacies from Croatia, so you’re in for a real treat here.

Plus, fresh tomatoes! Does anything scream SUMMER in a crowded theater like a tomato? I think not.

What would you do on a Mostar Day Trip? Does Toffifay make a good flavor of ice cream? And will you please think of me before risking life and limb on the Mostar Old Bridge? Please leave your thoughts below!

Note: If you want to know how I put my travel itineraries together, just click here. Keep in mind that while each article is about how to spend 24 hours in a place, that doesn’t mean you should ONLY have one Mostar day trip.