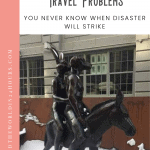 Greetings Internet Stranger and welcome to how to handle travel problems. Many travel bloggers wax unrealistically eloquent about the wonders of travel! Travel will expand your mind! It will make you a kinder, better, wiser, gentler, thinner, fancier, savvier, crustier person! All you have to do is eat, pray, love your way to your best life now! But what do you do when the worst happens? What do you do about…travel problems?

Consider me your Travel Problems Yoda! I’ve been through all sorts of travel problems from an active shooter situation that shut down an entire city to food poisoning so bad that it left me curled up helpless and alone on the side of a lake in northern Vermont. But I’m going to tell you my favorite travel problems story: the time snow tried to stop me from going to Brazil. Along the way, I will teach you my…

PS. I do not have photos from this trip, so I’ll be peppering this post with photos of airplane and snow and things.

One December 26th, several years ago, I was getting ready to take my very first trip to South America. In fact, I was going to ring in the New Year in Rio de Janeiro, Brazil! It was such a long trip that my flight had two legs: NYC to Atlanta, then Atlanta to Rio. This was before I started traveling very much, and I was super excited and nervous.

But my excitement turned to ice in my veins when I learned that my hometown New York City was about to be hit by a massive snowstorm. This meant that my flight was sure to be canceled. And sure enough, I got that dreaded email from Delta Airlines letting me know that my flight from NYC to Atlanta was done-zo.

Here’s when step one comes in. When you first realize you’re in the middle of one of those crazy travel problems, do not panic! Take a deep breath. If you need, take two deep breaths. Take as many as you need. Just don’t start hyperventilating because you might faint and that will only make the problem worse.

I hate asking for help. In fact, my mom used to tease me that I am secretly a guy because I refuse to ask for directions, no matter how lost I am. But when travel problems happen, you need to ask for help! Especially if a company like an airline is involved. So after I took some calming breaths, I called Delta Airlines and asked how I could get to Rio.

3) decide whether to play it safe or not

During pretty much all the travel disasters I’ve been a part of, there has come a time when I’ve had to decide whether I wanted to stick with what everyone else was doing or whether I wanted to come up with my own solution. No one can make this decision for you! It will be entirely dependent on what your travel disaster is and your own comfort level with handling it.

In my case, I didn’t think it was a good idea to accept Delta Lady Robot’s solution. Both the NYC and Philadelphia airports were likely to be backed up with air traffic for days while they recovered from the Blizzard Disaster. There was no guarantee I’d make my flight to Rio from Atlanta. I had two days to get to Atlanta for my Brazil-bound plane. And sunny Georgia hadn’t really been affected by the snow. It seemed like a much better idea to try to get from New York City to Atlanta…by land!

So you’ve decided to follow me and go your own way. Excellent! But just because you’re getting off the beaten track doesn’t mean you should get careless. Do as much research as you can about all of your options. If you have internet access, take advantage of that. And keep your options open! I asked the Delta Lady Robot to keep my reservation on that flight out of Philly in case my plans to get to Atlanta over land did not work out.

I then Googled the heck out of the phrase “nyc to atlanta” and learned that Greyhound Bus had a bus that would get me to Atlanta by road in about 18 hours. That would still leave me plenty of time to make my flight, if everything went well.

SPOILER ALERT! Everything did not go well.

When making it through travel problems, staying flexible is the most important strategy. Whether it was the time I got stuck on a mountain in Montenegro or during The Scott Gold Incident of 2018, staying flexible has always gotten me through tough times. Just when you think a travel disaster can’t get worse, that’s the moment when it does.

In my case, I was on the Midnight Bus to Georgia and everything was running smoothly, when we stopped at the Greyhound Bus Station in Richmond, Virginia to take a stretch break. Now, I’m a fairly upbeat traveler, and I can honestly say I like every place I have visited.

And the only thing worse than taking a stretch break at the Greyhound Bus Station in Richmond, Virginia is having your driver tell you that at 4 o’clock in the morning, when you are stinky, smelly, stressed, and running on no sleep, that your bus has been canceled. The next bus is coming in 12 hours. The bus driver refused to offer us any further advice or assistance. I needed a new plan ASAP.

When all hope seems lost, you might be tempted to wallow in your problems. DO NOT DO THIS! Focus on what you’ve got going for you. A cool and even temper? Lots of friends who can help? A boatload of cash to throw at the problem?

In my case, all I had was my baby face and a total lack of shame. These assets get me out of a surprising number of problems. I went up to the nearest Greyhound bus driver, explained the situation, and promptly burst into tears. He took pity on me and told me that he was about to leave for Raleigh, North Carolina. He then offered to take me on his bus free of charge. I said yes! Raleigh is closer to Atlanta than Richmond. That’s just science.

No matter how bad your travel problems seem, refuse to surrender! That doesn’t mean stick with a course of action you can see is failing. But as Winston Churchill said, “If you’re going through Hell, keep going!” If you’re in the middle of an emergency, don’t curl up in a ball and pretend it’s all a bad dream. Eventually things will look up.

In my case, once I arrived in Raleigh, it was 7 in the morning. That meant the airport would be open. Delta has many flights from Raleigh to Atlanta, and they still owed me a domestic ticket. So I split a cab to the airport with a friendly lady who was in a similar situation. (And I’m extremely grateful that she agreed to share the cab with me even though I was extremely smelly.)

At the Raleigh Airport, I went straight to the Delta counter and told my whole, long, hideous tale to the woman at Customer Service. Her eyes got wider and wider until I finished, and then she proclaimed, “You’re a very resourceful young woman! We’re going to get you to Atlanta!” I almost kissed her full on the mouth out of gratitude, but I didn’t because it had been so long since I had brushed my teeth. But this just goes to show that if you’re persistent, people will be so impressed by your courage/madness that they will go out of their way to help.

Most travel problems seem awful when you are living them, but in the long run they just end up being funny stories to tell our grandchildren/blog readers. My father’s brother lives in Atlanta, so by the time he took me to his house, let me shower, nap, and eat, and drove me back to the airport, my plane/bus/plane nightmare seemed like a distant memory. But my memories of my time in Rio de Janeiro will stay with me forever! So I say the travel disasters are worth it!

That’s How You Handle Travel Problems!

Have you ever had travel problems? How did you handle it? And why would a benevolent deity put a Hellmouth in a Greyhound bus station in Richmond, Virginia? Please leave your comments below!