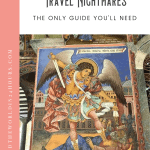 Greetings Internet Stranger! One thing that sometimes holds people back from the wonders of traveling is a fear of dealing with strangers. The problem with strangers is that they are so strange and unpredictable. We don’t know what pleases them and what enrages them. And what if we make them angry? It’s often hard to know How to Be Kind to Unkind People, especially angry strangers.

I wish I could tell you you’ll never need to know How to Be Kind to Unkind People when you travel, but that would be a big, stinky lie. I have to handle angry people every day, from the emails I sometimes get from people angry that I recommended a restaurant they did not care for, to my crazy downstairs neighbor who is angry that I sometimes walk inside my own apartment.

And when you travel, anyone can get angry at you, from a waiter to the three teenage boys you are forced to share a hotel room with in Zurich. But not knowing How to Be Kind to Unkind People is no excuse for not traveling! Unless someone is actually being violent or threatening you, in which case seek help immediately, there are ways to defuse the situation with even the crankiest of souls.

On a recent trip to Bulgaria, I had a driver who was truly one of the angriest people I have ever encountered. I am absolutely not going to use my driver’s real name here, as I plan on saying a lot of ridiculous things about him. So I will call him Viktor, as this is the name of sexy, fictional Bulgarian Viktor Krum.

And I certainly hope no one takes this article to imply that Bulgarians are especially angry. I happened to meet one angry Bulgarian, but everyone else in the country was really nice to me. And you can meet mean-tempered people no matter where you go. That’s why it’s so important to know How to Be Kind to Unkind People.

As nerve-wracking as my time with Viktor was, our unpleasant interaction taught me many valuable lessons about How to Be Kind to Unkind People. So I am prepared to share with you…

approximately top 5: How to Be Kind to Unkind People

1) understand the anger is not about you

The first step in learning How to Be Kind to Unkind People is realizing that you did not cause this person’s anger. This person was angry about something long before they met you. I had hired Viktor to take me from Skopje, the capital of North Macedonia, to Sofia, the capital of Bulgaria. Along the way, I wanted to stop and see a few sights in the Bulgarian countryside, since I didn’t know when I’d have the chance to be back.

As soon as I met Viktor, I could tell he was the type of person my mother used to call “God’s Little Angry Man”. He was mad that the receptionist at my hotel in Skopje wouldn’t speak Bulgarian with him. (The relationship between North Macedonia and Bulgaria is so complicated, I absolutely don’t have time to get into it in this blog post.)

He was angry that I wanted to stop and see a waterfall and some ruins on the way to Sofia. And finally, he was angry that I hadn’t decided to stop at Rila Monastery on my way to Sofia. “HOW CAN YOU VISIT BULGARIA WITHOUT SEEING RILA MONASTERY??????” Viktor shouted, while giving me the evil eye in his rearview mirror. “IT IS THE MOST BEAUTIFUL SIGHT IN BULGARIA!!!!” It was the angriest I’d even seen a person be about a monastery, and my apartment was once haunted by an evil monk.

But after I took a few cleansing breaths, I realized that Viktor was making a good point. I hadn’t planned on seeing Rila Monastery because it seemed far out of my way. But if he was offering to take me there, I should take advantage of the opportunity, no matter how loud Viktor got. I’m sure there was something in his life that made him shouty long before he ever met yours truly. And I’m grateful I was able to ignore his rudeness because Rila Monastery really is gorgeous, and I’ll never forget seeing it.

When you encounter people who seem irrationally angry, remind yourself that you are not the one who made them unkind. They were unkind before they ever met you. When you don’t take the anger personally, it will help you get the most out of whatever interaction you need to have with The Unkind One.

Even angry people don’t often like talking to other professional cranks. If you’re trying to figure out How to Be Kind to Unkind People, trying showing them the positive side of whatever is making them unkind.

I had asked Viktor to take me to a small waterfall called the Ovcharchenski Waterfall on our way to Sofia. Bulgaria has quite a few beautiful waterfalls, and I live in New York City. Viktor kept bellowing, “THIS WATERFALL IS GARBAGE NEXT TO OTHER WATERFALLS IN BULGARIA! WHY DO YOU WANT TO SEE THIS GARBAGE?” Listening to his grumbling and negativity was really bumming me out, especially because it was drowning out the peaceful babbling of the waterfall.

But instead of snapping at Viktor to shut up, which I definitely wanted to do, I tried to explain that this waterfall was convenient to get to in between Skopje and Sofia. I added that to me it was exciting because it was my first Bulgarian waterfall and I’d never seen one before. Eventually Viktor stopped complaining, either because I made sense or because my relentless positive attitude was making him ill.

You can do the same thing if you have to spend a long period of time with an Unkind Person. No matter what they say, don’t get dragged down into the mud of misery with them. Even if it doesn’t make them feel better, staying positive will make you feel better. I know it sounds like I’m asking you to be a Care Bear and shoot light out of your tummy at Professor Coldheart, but I promise it works.

Sometimes there’s nothing funnier than a kid throwing a temper tantrum. It’s hilarious how a child can lose all perspective and start wailing because their brother looked at them funny or because their mom took away a tick that they had captured in a jar and tried to keep as a pet. (That last one is a true story from my teaching days.) And what is an Unkind Person but an adult child throwing a temper tantrum?

Our last stop before arriving in Sofia was at the Krakra Fortress ruins. These ruins overlook the city of Pernik, which is the second-biggest city in western Bulgaria. All Viktor could do on the drive was moan, “WHY DO WE HAVE TO GO THROUGH PERNIK? IT IS THE UGLIEST CITY IN BULGARIA!!!”  He hated it so much. In fact, he kept referring to it as the “Asshole of Bulgaria”.

Well, if you can’t see the funny side of this story, I’m not sure that there’s any hope for you. But it certainly gave me a good chuckle as I wandered around the Krakra ruins, thankfully without Viktor. Every time I’d see the views of Pernik, I’d think…

BEHOLD! The asshole of Bulgaria!

If you feel like an unkind person has too much power over you, try to see the humor in their ridiculous behavior. It helps to think of them as a large child fussing because they didn’t get their way. Just don’t laugh out loud in front of the Unkind Person. I can pretty much guarantee that will only make them angrier.

4) validate their feelings when you can

Sometimes even a Very Unkind Person can have a good reason for being angry. As we drove through Sofia, we went past a monument to Soviet soldiers located in Knyazheska Garden. Viktor started yelling about how angry this monument makes him because the Communist period was really terrible in Bulgaria and the Russians have been terrible to the Bulgarians and he shouldn’t have to look at this statue every day.

As unpleasant as Viktor was, I could see this anger was coming from a real place of pain. Viktor was older than I was, and he had lived through a very difficult period of history. I tried saying, “Yes,” to indicate sympathy, but this only made Viktor angrier. “I AM NOT SAYING YES TO THE STATUE!” he yelled at me. “I AM SAYING NO! NO TO THE STATUE!”

I explained that I was saying yes to his feeling of anger at the statue specifically and Soviets in general. This seemed to mollify him enough that he stopped shouting. In fact, I got to enjoy the rest of the (very short) ride to my hotel with no further yelling.

Often when a person is unkind, it’s coming from a place of real pain. I’m not suggesting that if you want to know how to handle an unkind person, just hug them tight and say, “It’s not your fault”. But if they have a legitimate reason for being angry, hear them out. If you agree with them, tell them they’re right.

5) don’t spend more time with them than necessary

When Viktor finally dropped me off at my hotel, he gave me his card and said he’d be happy to take me sightseeing when I was in Sofia. I resisted the urge to scream, “WHEN HELL FREEZES OVER, PAL!” and instead said that I already had a lot of plans booked, so I probably wouldn’t be able to. Then I said goodbye to Viktor, hopefully forever and ever, and soothed my jangled nerves with ice cream.

Do not spend more time with someone who is being rude to you and throwing anger in your face than you have to. You deserve better. Sometimes it’s unavoidable, so follow the first four tips I gave for diffusing the situation. But then leave the Unkind Person be and get some ice cream. You deserve it.

That’s How to Be Kind to Unkind People!

How are you Kind to Unkind People when you travel? Who was the rudest person you ever had to spend time with on a trip? And have you ever seen the Asshole of Bulgaria? Please leave your thoughts below!

link to 1 Perfect One Day in Lisbon Itinerary

Greetings Internet Stranger and welcome to a one day in Lisbon itinerary! Ask any Lisboner about Belem Portugal, the historic neighborhood just to the west of the city center, and they will tell you...

Continue Reading
link to 1 Perfect One Day in Porto Itinerary

Greetings Internet Stranger, and welcome to our one day in Porto itinerary. I bet you thought that we’d done everything there was to do in Portugal’s second city yesterday, right?! Today we’re...