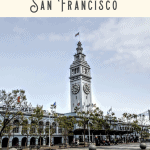 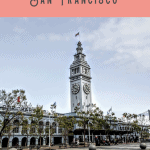 Greetings, Internet Stranger! So you want to know how to have a perfect Bay Area day trip? Ordinarily, I prefer to spend my traveling days exploring one neighborhood at a time so that I really come to know a city.

However, sometimes it is preferable to spend the perfect Bay Area day trip exploring one or two major attractions like Alcatraz and Angel Island. And when it comes to the Bay Area’s most famous prison, even one day might not be enough time to fully unlock its secrets…

I was embarrassingly broke when I enjoyed my Bay Area day trip, so I stayed in a SuperCheap Motel that I can’t recommend to you. (Yes, I’m pretty sure SuperCheap was the real brand name.)

The next time I have a Bay Area day trip, I’m staying at the Cartwright Hotel. It’s located right by Union Square so it’s not far from the Alcatraz ferry terminal, it has free wifi, coffee makers, and an airport shuttle, and there might even be a ghost or two. I’m sold!

If you’d like to join me for our Bay Area day trip at the Cartwright, just click here. But if you’d rather strike out on your own and you want to find deals on hundreds of hotel rooms in San Francisco, just click here.

Alcatraz is one of the most popular tourist attractions for a Bay Area day trip, which is pretty funny when you consider that men used to risk their lives trying to get away from there.

Alcatraz or The Rock, as Michael Bay calls it, used to be a military prison before it became a notorious maximum security facility and home to one Alphonse Capone, among many other vicious criminals.

If you want to visit Alcatraz, the only way to get there is to buy a ticket on the Alcatraz Cruises website. Please buy your tickets as soon in advance as possible because they do sell out several weeks in advance.

The website recommends that you buy tickets 90 whole days in advance, like Alcatraz is some restaurant that got featured on Chef’s Table. Also you will need a photo ID to pick up your ticket at Pier 33. I guess they’re afraid some criminals might try to bust INTO Alcatraz.

I recommend taking the Alcatraz/Angel Island joint tour, which leaves just after nine in the morning. Eat a hearty breakfast and take a snack with you because there is no food on Alcatraz. You won’t be able to get something to eat until you arrive on Angel Island in the afternoon.

Be sure to get to Pier 33 early so that you can pick up your tickets and get on line for the ferry to Alcatraz with time to spare. That way you can fit in…

Absolutely the best thing to do on Alcatraz is taking the exciting and detailed audio tour of the prison, complete with credible voice acting of readings from the diaries of Alcatraz inmates.

This tour is included with your ticket, so all you have to do is accept it politely when you arrive. Is that so hard to do, Internet Stranger? Didn’t your mother teach you manners?

2) Check out the prisoner cells

You actually get to peek inside the cells in which so many famous inmates from Whitey Bulger to Mickey Cohen to Andy Dufresne resided. (OK, Andy Dufresne is not a real person and he was actually fictionally held in an imaginary prison in Maine. But him aside, basically any prisoner who was any prisoner was kept here.)

You can walk from the regular cells to the more punitive solitary confinement cells.

Solitary confinement doesn’t seem that bad when the door is open, but imagine being shut in this cement box by yourself for several days. It would be enough to make a man want to dig his way out slowly using only a Rita Hayworth poster for protection.

3) Learn about Alcatraz’s most famous inmates

Capone and Robert Stroud (aka the Birdman of Alcatraz) aren’t the only famous prisoners to do time on the Rock. Another celebrity gangster was Elwood “Bumpy” Johnson, one of the most notorious gangsters in Harlem.

He was so famous that Clarence Williams III of The Mod Squad played him in the movie American Gangster. The informative signs scattered all around Alcatraz will help you learn all about these fascinating evildoers.

I always feel a little guilty spending so much time learning about murderers and miscreants. Sometimes I wish there were exciting tourist attractions dedicated to Very, Very Nice People. Get on that, Internet!

Apparently the inmates were really into reading works of systematic philosophy in the prison library. I guess you have a lot of time to contemplate man and meaninglessness when you are doing ten to twenty. This may be one of my favorite signs I have ever seen. Who knew that bootleggers were into Schopenhauer?

If the tour goes too long, you won’t have enough time to do a ranger tour and the Alcatraz prison audio tour before your ferry to Angel Island will leave from Alcatraz around noon.

PS. I feel like calling Alcatraz a “National Park” really stretches the definition of park. But maybe that is why they’ve never put me in charge of the national parks department.

We’ll obviously continue our Bay Area day trip by going to Angel Island. After a harrowing morning spent listening to tales of prison breaks and solitary confinement, you will be happy to know that Angel Island is…even more depressing than Alcatraz!

But fortunately it is much prettier than Al Capone’s former summer (and winter) home, which makes sense given that it was never a maximum security prison. Some of the views of the Bay Area from here will absolutely take your breath away.

A tram tour is included with your ferry ticket, so you will be able to see all the most important spots on the island without having to do any walking at all. I know how lazy you can be, Internet Stranger! And I sympathize!

Just as Alcatraz served as a military prison, Angel Island used to be home to Fort McDowell during the end of the 19th century. Before this Bay Area day trip, I never knew that the army was allowed in San Francisco! I thought if the military tried to show up in SF, the locals would just sing songs about flowers at them until the GIs ran away screaming.

You can still see the buildings left over from the island’s military days. I think they’re awfully cute for army barracks! And just look at those pretty purple flowers. This was my favorite spot on the island.

3) learn the history of Asian immigration in the us

But Angel Island is not primarily famous for being a military fort; it is most known for being an immigration processing center for Asian immigrants. It is basically California’s answer to Ellis Island, only no one has set any Godfather movies here.

Sadly because of the racist Chinese Exclusion Act passed by the US government in 1882, many Asian immigrants were trapped on the island for years waiting for permission to enter the United States.

There’s a museum now where the Immigration Center used to be, but it’s not possible to visit it on the Tram Tour. If you want to fully explore Angel Island, you’ll have to come back on another day.

4) Eat lunch at the Angel Island Cafe on the island

I had the chili and it was just fine. But you might not be able to eat lunch until after the Tram Tour is complete, so again, make sure to bring a snack!

Dinner: The Cafe at Chez Panisse

Since we are spending this Bay Area day trip exploring the environs of San Francisco rather than SF proper, I think it only appropriate to dine in the adjacent city of Berkeley, California.

It is very easy to get to Berkeley from San Francisco just by taking the BART train from Embarcadero Station. Part of the reason anyone would want to go on a Bay Area was so that I could eat at the legendary restaurant Chez Panisse in Berkeley.

An Amusing Anecdote From My Childhood

Any food historian knows that Alice Waters basically invented California cuisine in these hallowed halls on Shattuck Avenue in the 1970s, and she is still going strong today. I have wanted to come to this restaurant ever since I read her cookbook for children, Fanny at Chez Panisse, at the age of nine. As I’ve said before, I was a weird kid.

It is very hard to get reservations at Chez Panisse, so be vigilant if you really want to dine here. They start taking reservations exactly one month in advance. Sadly, I was not able to book a table in the restaurant, but I had no trouble getting a table for the cafe upstairs.

The food at Chez Panisse exactly lived up to my childhood expectations, and next time I have a Bay Area day trip, I will do everything in my power to get a reservation at the restaurant. Until then, I leave you with my thoughts on the food because I was too scared of Alice Waters to take photos.

I feasted on salad greens fresh from the garden, ravioli with peas, mint, and pecorino, and tangerine sorbet with rose gelee. The salad greens indeed tasted like they’d just been plucked from Mr. McGregor’s garden, and the ravioli with peas bathed me in the warm glow of a perfect spring day. Perhaps May 2nd.

But the highlight was the tangerine sorbet which tasted like the most gorgeous tangerine ever. Like maybe this tangerine is Gisele Bundchen’s sister. Really, at Chez Panisse, anything could be possible.

What would you do on a perfect Bay Area Day Trip? Is it weird that a prison is a major tourist attraction? And what’s the sexiest citrus you’ve ever eaten? Please leave your thoughts below!

Note: If you want to know how I put my travel itineraries together, just click here. Keep in mind that while each article is about how to spend 24 hours in a place, that doesn’t mean you should ONLY spend 24 hours in the Bay Area.

If you have another 24 hours in San Francisco and want to see the cable cars, try this itinerary. If you’re more interested in Golden Gate Park, this 24 hour itinerary should help.