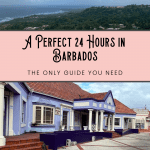 Greetings Internet Stranger, and welcome to the best things to do in the Barbados Cruise port. Barbados is so full of wonderful things to do that it’s hard to know where to start.

Would you like to dine on delicious food and sip some rum? Barbados has that. How about gazing at beautiful architecture? You can do that in Barbados. What if you’d prefer a little mac and cheese? Believe it or not, Barbados has that too.

Join me for a perfect itinerary of the best things to do in the Barbados cruise port, and you’ll learn to fall in love with this beautiful island too.

Contents hide
1 Where To Stay?
2 What to Pack
3 Morning: Sunbury House
4 Afternoon: Scenic Drive and Explore Barbados
5 Evening: Dinner at Izumi
6 How To Get There

I always cruise with Royal Caribbean because I get loyalty points, I like their Drink of the Day scheme, and there are no sketchy guys around trying to lure me back to their cabin because it’s a family cruise line.

You can find all of Royal Caribbean’s cruises that stop in the Barbados cruise port here. And you can look for great cruise deals by booking through Expedia here.

Most shore excursions that I’ve seen in Barbados have one longer stop combined with a scenic drive. We’ll do the scenic drive in the afternoon, but in the morning, we’re going to stop at the Sunbury Great House for a little history and a fun food lesson. You’ll learn a great deal about the history of Barbados, both past and present, here.

I don’t want to spoil the entire tour for you, but I do want to share…

As you can probably guess, the Sunbury House used to be a sugar plantation, owned by an Irishman. That meant that enslaved people were forced to do the work while the plantation owners lived a luxurious lifestyle. (Above you can see how fancy their undergarments even were.) After slavery was abolished in Barbados it just became a fancy mansion until it was turned into a National Heritage House and Museum in the 1980s.

The house itself dates all the way back to the 17th century, even though it was damaged in a fire and more recently restored. When I took the tour, the docent focused on the beautiful furniture in the house, including a copy of a portrait of Queen Elizabeth II’s mother when she was young and beautiful. (At first I was surprised they’d have a portrait of a member of the British royal family in the home of an Irishman, but the house was sold several times and often belonged to an English family.)

2) What makes this house special?

This house is especially interesting from a historical perspective in Barbados because it’s the only plantation house that has all of its rooms available to show. We were not taken to see any quarters where enslaved people lived, but we were taken to see the various kinds of tools used in sugarcane production. Using these tools to produce the massive amount needed for sugar consumption and rum production took an enormous amount of skill and effort.

The house is also interesting because it was one of the locations where Bussa’s uprising, a famous slave rebellion in Barbados in the early 17th century, took place. But our docent didn’t say too much about that, so I’m not exactly sure how much it was involved.

3) What’s going on in the house today?

Nowadays, Sunbury House is famous for fine dining, so we got to try some of their delicious snacks like jerk chicken, fish cakes, and plantains. But the bulk of the food lesson was devoted to making two classic Barbadian cocktails. (I’m pretty sure Mount Gay rum helped sponsor this, but I’m not exactly sure where I got this idea.)

One of the cocktails was the famous rum punch, and it was super entertaining to watch our guide make it because she said you need to do a nutmeg shake dance when you sprinkle the nutmeg on top. Then she would claim to be measuring very carefully, but instead she would just dump a whole bunch of Mount Gay in the punch.

The other cocktail was the less well known (outside of Barbados) concoction called corn and oil. It’s made with rum and a spiced almond liqueur called falernum. Falernum can be hard to find outside the Caribbean, so how convenient that they sell it at the Sunbury House gift shop. I got to buy a whole bottle and make as many corn and oils as my little heart desires. (At the end of the cocktail demonstration, they give you recipes for everything they made.)

Best Things to do in the Barbados Cruise Port

No stop at the Barbados cruise port could be complete without a scenic drive around the island. After all, Barbados is simply one of the most stunning places in the entire world, so you need to see as much as you can. Sadly, I can’t guarantee that you’ll have our guide and her special nutmeg shake dance. But I can give you an idea of what to expect with…

Our scenic drive took us all around the coast, even past the famous lion statue on Gun Hill. This statue was carved out of a single piece of stone by a 19th century British officer. I guess if you’re assigned to guard a hill and have too much time on your hands, this is what you get up to.

Our guide also entertained us on the drive with tales of Barbados history. My favorite was when she said that Barbados was the first country to have a female Governor-General and a female Prime Minister at the same time, so don’t come to Barbados if you don’t like strong women! I think Rihanna could have a big hit with a song with that title, don’t you? It might be a little more feminist than “Bitch Better Have My Money“, if not quite as fun to sing at karaoke.

St John’s is an unusual place in many respects. First, it’s a popular spot for just about any tour bus squiring about visitors to the Barbados cruise port. But it’s also a working Anglican church with an interesting cemetery in the back. Don’t miss the chance to see the grave of Ferdinando Paleologus, who is a distant relative of the Emperor Constantine.

Also, be sure to get a glimpse of the stunning interior. That’s real mahogany wood in that altar, and you can see how lovely the stained glass windows are, even from my slightly blurred photo.

After the scenic drive, you’ll probably be hungry because we only had some small bites at the Sunbury cocktail demonstration. So let’s take the quick walk over to the Pelican Craft Centre and get some lunch at Dre’s Bar and Restaurant. Of course, we only had two small rum drinks on the tour earlier, and that’s not nearly enough for a stop at the Barbados cruise port, so you’ll want to get a proper rum punch here.

Then I suggest getting a macaroni pie to soak up all that rum. This doesn’t sound like a local dish, but I promise it’s very popular in Barbados! It’s like a thick baked macaroni and cheese, and it’s full of crusty goodness and fun add-ons like ketchup, evaporated milk, and mustard. Don’t miss out when you are in Barbados!

Of course, the main reason to go to Pelican Craft Village is to shop! It’s hard to predict which stores will be open on which days, but if a cruise ship is in town, most will be open. Number one place to visit is Pottery Palace where you can meet the lovely Wendell who makes many of the items in the store. Just make sure to bring cash because they do take US dollars, but not credit cards.

Then head to Jenanya’s where you can pick up gorgeous hand-painted clothes like my skirt above. (I get compliments 100 percent of the time that I wear this.)

Finally, stop at the Monkey Pot where you can pick up some amazing handmade jewelry. As an avid earring collector, I couldn’t resist picking up these beauties made from real shark’s teeth. I’m sure you can find something just as delightful.

Naturally we’re going to spend the evening of our delightful Barbados cruise port excursion back on our ship. After that rich macaroni pie lunch and all that rum, let’s make things a little lighter by grabbing dinner at Izumi, the Japanese specialty restaurant on Royal Caribbean. Start with some of their crispy, yet not at all greasy, fried chicken. (Japanese fried chicken is the best in the world; I will fight all of you on this issue.)

Then go for some of the sushi and sashimi, like the tuna sashimi with wasabi and jalapeno, that has a really satisfying kick to it. In the back, you can see the chef’s signature roll, which tasted like a normal salmon roll to me, only topped with lobster tempura and saffron for total decadence.

You might not think of raw tuna and saffron when you think of cruise ship dining, but that is only because you have never cruise ship dined with me before, Internet Stranger!

Izumi, like many Japanese restaurants, is not big on dessert, but they do have some mochi, which is ice cream stuffed in a kind of soft rice dumpling bun. You get three flavors: chocolate, mango, and green tea. The waiter warned me that some people find the green tea bitter, which it is, but that just makes the flavor more interesting. I liked all the mochi, but I think the rich chocolate was the most satisfying.

And once you wrap up with dinner, return to your room where a killer bunny rabbit will be waiting to pounce!

Now, I wish I knew where you lived, Internet Stranger, because I could send you a box of the finest rum. But sadly, I do not, and so I can’t tell you exactly how to get from your home to the Caribbean.

But I can tell you that I used a lovely airplane to get from my hometown NYC to London, and then I took a shorter flight to San Juan, Puerto Rico, where my cruise was docked. I recommend Expedia for the best way to find the cheapest flight to the Caribbean at the best time of day.

You can even use Expedia to rent a car so you’ll be all set when you arrive at your destination. (I can’t drive, but if you can, this must be helpful.)

Just click here to start looking for the best possible deals on your flight, so you can head out on your Barbados Cruise port shore excursion ASAP.

That’s a Perfect 24 Hours in the Barbados Cruise Port!

What do you think are the best things to do in the Barbados cruise port? Can you do the nutmeg shake dance? And is that towel rabbit cute or terrifying? Please leave your thoughts below!