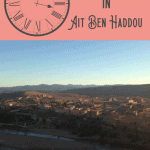 Now you say we will spend 24 hours in Ait Ben Haddou with a beautiful Morocco kasbah, but we are going to spend the entire morning exploring the High Atlas Mountains. What madness is this?”

Well, you are half right, Internet Stranger. I don’t necessarily spend my entire 24 hours in the confines of one city. But I choose my title based on the place you should use as your base for the day’s activities. So for this itinerary, you should choose a hotel in Ait Ben Haddou.

It’s the perfect place from which to explore the surrounding mountainous area. We’re going to spend 24 hours in Ait Ben Haddou admiring the roses and learning all about the Moroccan film industry. Sound exciting? Good! It is exciting! Now come with me.

Morocco can get very hot, so don’t forget the sunscreen. My favorite is the Neutrogena spray bottle because it’s so easy to apply. And as a solo traveler, I can actually use it myself on my own back. I just put it in my purse and re-apply throughout the day.

And If you’re looking for great deals on almost 100 hotels in Ait Ben Haddou, click here!

The High Atlas Mountains are a major mountain range that cut through Central Morocco. It’s home to everything from snow-capped peaks to Berber villages to dinosaur remains. If you want to get to know the Morocco outside of the major cities, this is an excellent place to start. Even though I only had one morning in this area, I was still able to learn…

1) valley of a thousand kasbahs

The road between our Todra Gorge hotel and the city of Ourzazate is colloquially known as the Valley of a Thousand Kasbahs. (More officially, parts of the area are known as the Dades Valley.) Before I went to Morocco, the only thing I knew about kasbahs was the song “Rock the Kasbah”. And I didn’t even know what that meant because it’s very hard to understand what The Clash are saying. A kasbah in Morocco is just a keep or a fortress. You can see hundreds of them all dotting the landscape here in the Dades Valley.

I have to wonder what was going on in this area that they needed so many fortresses. There is simply never a pleasant reason for building a fortress. No one has ever said, “Ho hum. My life is so boring, and my relations with my neighbors are so peaceful. Time to build a fortress!” You’d think living in such a gorgeous area would make people feel less inclined to go to war.

Aside from kasbahs, the Dades Valley area is famous for roses. It never occurred to me that you could grow roses in the mountains. It was so cold when we were there in December! But of course the roses are in bloom in May, so we missed them. However, we did not miss this giant statue of a bowl of roses in the middle of town. Way to remind people of their main cash crop in the dead of winter!

Fortunately, even if you miss the rose season, you can still stop and smell the roses themselves. There are many stores in the Dades Valley area that specialize in selling rose products. You can buy rose water, rose cream, rose perfume, rose candy, rose candles, rose tea, rose coffee, and even rugs made out rose petals. (Some of those items are real and some are just made up. I leave it up to you to guess which is which.)

3) The Hollywood of Morocco

The final kasbah we came across this morning was the kasbah of Ouarzazate. Ouarzazate is often considered the Hollywood of Morocco, which I suppose means it’s famous for plastic surgery and sexual harassment. Also Ouarzazate is the home of the Atlas Film Studios.

Now that we’re done driving around, we’re ready for the main attraction:  our 24 hours in Ait Ben haddou. Ait Ben haddou is a fortified village, known as a ksar in Arabic. There are other ksars in Morocco, but this is considered the best of its kind. That is why it has been on the UNESCO World Heritage List since the 1980s.

Our guide Omar led us around the ksar and explained a little bit about its history to us. It’s well worth spending an afternoon here, peeking your way around every little nook and cranny. I’m sure you’ll find much more than…

1) Are You Not Entertained?

Because of its striking appearance and its proximity to the film studio in Ouarzazate, Ait Benhaddou has been used in many films. Probably the most famous movie to use this location was the Russell Crowe starring Gladiator. This was back when everyone still loved Russell Crowe and didn’t know he liked to throw phones at people.

The ksar of Ait Ben haddou is no longer inhabited. But as with any place that attracts tourists in Morocco, you can find lots of people trying to hawk you their wares. My favorite local item were these watercolor paintings.

The brown color is made with tea! That’s such a clever idea! I took this home and put it up in my apartment to remind me of my friend Camille the Camel. No 24 hours in Ait Ben haddou is complete without a souvenir!

Since we were looking at a thousand kasbahs all morning around Ouarzazate, you might be asking yourself what the difference between a ksar and a kasbah is. Well a kasbah is just one fortress. A ksar is an entire fortified village. Do you see all the different little buildings down there? They would have been kasbahs, a mosque, homes for merchants, and any other building a village would have needed.

To me, the most impressive thing about the ksar is that these buildings are all made with red clay. That seems like such a flimsy material! And yet the buildings are still going strong today. My apartment building is supposed to be made of “modern materials” and “up to safety codes”, but I can see it crumbling every day before my eyes. I’d rather live in Ait Benhaddou any day.

I followed the instructions extremely carefully. Knowing that if you mess up you don’t get dinner is a serious motivator! You have to start with the chicken, onion, spices, and oil. This makes sense because it’s most important to cook the chicken thoroughly. You’re not going to get salmonella from an uncooked carrot. Also, vegetarians shouldn’t fear the tagine cooking class because you can just skip the chicken and move straight to vegetables.

Next you add the veggies. The ones that take longer to cook, like carrots and potatoes, go on the bottom. The lighter ingredients like tomatoes and the preserved lemon go on top. (Yes, I know that tomatoes and lemons are fruit. If you comment to tell me that, I will under no circumstances publish it. No one likes an internet pedant!)

Here is what the tagine looks like before you put its cute little pointy hat on and cook it.

And here it is all ready to it! This isn’t meant as a brag at all, but it felt like one of the most delicious things I had ever eaten because I cooked it all myself. Mostly the only thing I ever cook for myself is the turkey burger and salad combo I eat literally every single day when I’m at home and working my day job. So this experience definitely made me motivated to take more cooking classes abroad.

What would you do with 24 hours in Ait Ben haddou? Are you ready to start booking your hotel in Ait Ben Haddou?How do you think Ouarzazate should be pronounced? And am I the greatest tagine maker in the world, yes or yes? Please leave your thoughts below!

Greetings, Internet Stranger and welcome to the best things to do in the Garden District! The Garden District is the classiest, most upscale neighborhood in New Orleans. Many celebrities have...