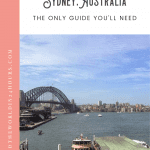 Greetings, Internet Stranger and welcome to 24 hours in Sydney! It’s a lucky traveler who gets to spend 24 Hours in Sydney. Sydney is such a disgustingly fun city that you could do nothing but sit at Sydney Harbor all day staring at Chris Hemsworth lookalikes walking by and still get your money’s worth.

But if you manage to get off your duff and do some sightseeing, you will find amazing Asian art, cemeteries, jumping koalas, and tourists in dire need of a history lesson. These are just some of the best things to do with 24 hours in Sydney.

Contents hide
1 How To Get There
2 Where to Stay?
3 What to Pack?
4 Morning: Museum of Contemporary Art Australia
5 Afternoon: Explore Sydney Harbor
6 Evening: Sydney Opera House

Now, I wish I knew where you lived, Internet Stranger, because I could send you a beautiful box of Australian meat pies. But sadly, I do not, and so I can’t tell you exactly how to get from your home to Sydney.

But I can tell you that I used a lovely airplane to get from my hometown NYC to Sydney, and I recommend Expedia for the best way to find the cheapest flight to Australia at the best time of day. In fact, Expedia even helped me figure out that it was best to fly round-trip from NYC to Melbourne, and then fly from Melbourne to Sydney. Play around with their search engine and see for yourself.

Just click here to start looking for the best possible deals on your flight, so you can head out to your 24 hours in Sydney ASAP.

I wish I could recommend the hotel where I spent 24 hours in Sydney, but I went to Sydney at New Year’s, and the hotel prices were astronomical. I was forced to stay in a suburb of Sydney called Ashfield, which I can’t really recommend.

Also I arrived at breakfast one morning with the back of my dress tucked in my stockings, and the owner of the hotel noticed and said something to me, and now I’m too embarrassed to ever go back to Ashfield.

The next time I spend 24 hours in Sydney, I’d want to stay in a more centrally located hotel. Since I’m American, it already takes me 10 years to fly to Australia, so I don’t want to waste any time once I arrive in the Land Down Under.

If you’re looking for a collection of over 3000 places to stay in Sydney, along with some pretty great deals, just click here.

There’s lots of cool/crazy works of art in the collection, but I will be happy to get you started with…

The docents are both knowledgeable and passionate. I highly recommend going on a tour of the collection highlights because your guide will definitely explain to you better than I why there is a sculpture of Spiderman looking at a freaky head in the museum. If you’re really motivated, you can take another tour of any special exhibitions going on.

2) Worth exploring? by Richard Bell

Bell is an Aboriginal artist, and according to our guide, he uses documents in his works of art. In this piece, he uses one of the Certificates of Authenticity that sometimes come with a work of art produced by an Aboriginal artist to question the ways in which white Australians have claimed ownership over the Aboriginal population.

After all, why should an Aboriginal artist have to produce a document for a white buyer in order to prove that their work is authentic?

I knew almost nothing about race relations in Australia when I arrived, and Bell’s work made me curious to learn more about the subject. I always say a good work of art is one that makes you ask questions that stick with you, and if you feel likewise, don’t miss Richard Bell.

3) The door was open by Nicolas Folland

This chandelier is the work of art here, not the painting, and the light fixture is actually encrusted in ice. Supposedly this is meant to make the viewer think about global warming, but all I can think of is what a fancy lady you would feel like if you had a chandelier covered in ice in your apartment.

This work looks like a collection of red sticky dots, but they are actually replicas made out of, I believe, plasticine. I think this is one of those pieces that’s meant to make you ask, “What even IS ART, anyway?”

5) Explore the art of the first peoples of Australia

Perhaps the best part of the museum are the works created by contemporary Indigenous Australians. Our docent pointed out that works like these are often not considered art that belongs in a museum, because they are objects like baskets and shoes, whereas paintings and sculpture, which are more likely to be done by wealthy and educated artists, are.

Now, paintings and sculptures are totally delightful, but what stick-in-the-mud would want to claim that these fabulous baskets hanging from the ceiling, looking like killer worms, don’t belong in a museum. I imagine it’s John Lithgow’s character from Footloose, and I hope the worms eat him.

After the museum, you’ll want to get some time during your 24 hours in Sydney for basking in the glow of Sydney Harbour and people watching.

The Harbour, which spellcheck is mad at me about spelling with an “ou”, is the first thing anyone thinks of when they imagine spending time in Sydney, and there’s a ton of things to do here. Let me help you get started with…

Begin by exploring the ground, and you will spot the Writers Walk made of medallions dedicated to various scribes. Here’s Joseph Conrad.

Or you could spot a message left by our future alien overlords, Kang and Kodos

The possibilities are endless!

2) Take a cruise around the harbor

The High Tea Tour is a pleasure cruise around Sydney Harbour that lasts about one hour and fifteen minutes, from 2:30-3:45. You have to book your tickets on the website in advance because the tour does sell out. But it’s easy to buy your tickets: just go ahead and click here.

A three course tea, a glass of champagne, and a pot of tea is included with the ticket. Even if eating tea is not your thing, you can still enjoy the gorgeous views of Sydney Harbour! The coolest part is getting a glimpse of Luna Park.

As a native New Yorker, I feel the need to point out that the first Luna Park was in Coney Island in our very own Brooklyn. But New Yorkers don’t mind sharing our amazing ideas with the world…

Though there are definitely better places than a harbor cruise for fine dining in Sydney, I definitely felt like you get your money’s worth with the high tea.

You begin with assorted tea sandwiches, which included a blini with a shrimp on it. This was tasty, but I don’t think Queen Victoria would approve of blinis as tea sandwiches.

As you can see, there are two other plates on the tea tray. As is traditional, one plate had scones and the other plate had sweets on it. I liked looking at the cute little cupcakes the most, but I preferred eating the fresh fruit tart with custard. Tart with lashings of custard is truly Britain’s greatest culinary achievement.

No 24 hours in Sydney is complete without a little Australian history, so head on over to The Rocks. The Rocks is a historic area next to the harbor. Like everything else in Australia, The Rocks area used to be home to the Aboriginal population.

Then, after the British colonists moved in, it became a crime-ridden slum filled with prostitutes and sailors and sailor-prostitutes, like something out of a Sherlock Holmes story.

Now of course, it has been gentrified. You can get fancy coffees and buy artisanal pickles and sneakers or whatever there.

I recommend starting at The Rocks Discovery Museum before going on to explore the neighborhood. This museum will give you a good foundation for understanding the neighborhood’s journey through time: from Aboriginal home, to den of vice and iniquity, to trendy hotspot. Actually, that sounds exactly like the history of every gentrified neighborhood ever.

The coolest things in the museum were all artifacts related to George Cribb, former resident of the Rocks. Like any good colonial Australian, George was an enterprising ex-convict. He came to Australia on a prison ship and promptly took up with another convict named Fanny.

Sadly, George was already Secretly Married, and when his wife came over from London, George gave Fanny some money and the old heave-ho. Later George’s wife died, and he remarried a woman named Sophia who later left him for his nephew. It’s like a 19th century version of Neighbours!

When you are done with the Rocks Discovery Museum, spend the leisurely afternoon of your 24 hours in Sydney exploring the buildings of The Rocks on your own.

You can actually climb up the area near Sydney Harbour Bridge. (This is different from climbing the bridge itself, which looks expensive and terrifying.) Then you can explore the area from a height and get some sweet views of the harbor!

The Sydney Opera House has had my heart even since I watched Carmen Sandiego steal it on an episode of Where in the World is Carmen Sandiego? I dreamed of attending a show there.

Lucky for me, there was an event that was just perfect while I was in Sydney. This was a Greatest Hits concert of some of the most famous arias in opera history, from Carmen to La Boheme to Nessun Dorma from Turandot.

Even if you are not an opera buff, I recommend ending your 24 hours in Sydney with a concert. You don’t need to follow along with the plot because there was a humorous introduction to each song given by the director of the program.

The singing was beautiful, and the audience even got to join in on singing the chorus to the drinking song from La Traviata. So if you go to the concert, you will be able to say that you sang at the Sydney Opera House!

The intermission was also one of the highlights of the show. This is because you get to buy some champagne and food and eat it on the balcony of the Opera House, which has spectacular views of the harbor.

Bonus! You will not need to worry about where to get dinner on the evening of your 24 hours in Sydney! And what’s classier than dining at the opera? Perhaps only eating high tea under a chandelier made of ice.

That’s a Perfect 24 Hours in Sydney!

What would you do with 24 hours in Sydney? What’s fancier than an ice chandelier next to Spiderman’s butt? And when is Netflix Australia going to make a miniseries about the life of George Cribb? Please leave your thoughts below!

And if you’re lucky enough to visit Melbourne too, I’ve got you covered here and here.

link to 1 Perfect One Day in Palm Springs Itinerary

Greetings Internet Stranger and welcome to a One Day in Palm Springs Itinerary. Like most Irish-Americans, my mother was a ride or die U2 fan. It feels I've been listening to the Joshua Tree album...