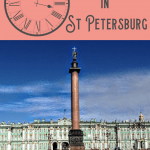 Greetings, Internet Stranger and welcome to 24 hours in St Petersburg, Russia. You are a rather adventurous person if you’re looking to spend 24 hours in St Petersburg. People warned me more about Russia than they did about any other country I have been to, possibly as some after-effect of the Cold War. “Russians are mean,” people said. “The food is bad, and the police will send you to Siberia without even a trial.”

As usual, the negative stereotypes were entirely wrong. St. Petersburg is beautiful, the food was very good, people were friendly, and the only encounter I had with a police officer was the one who sat next to me quietly as we listened to a free concert of religious music in a park. The only danger I saw in St. Petersburg is that there are too many fun things to do, and it’s hard to know where to start. Allow me to help you begin to plan a beautiful 24 hours in St Petersburg.

St. Petersburg is one of the most expensive cities in Russia. So if you’re spending at least 24 hours in St Petersburg, and you’re on a budget, but you still want to stay in the city center, your options are limited. That’s why I was glad to find the Nevskaya Classika Hotel. It was right near the Hermitage Museum, so the location was perfect. My room was clean, affordable, and convenient!

If you’re looking for a great deal on this hotel, just click here! And if you’d rather explore over 8,000 other great hotels in St Petersburg, click here.

You might be a little nervous about spending 24 hours in St Petersburg by yourself, or even with one or two traveling companions, but that’s where I come in! I’ve been to St Petersburg more than once, and I’m happy to show you my favorite attractions in the heart of historic St Petersburg. Let’s not waste any more time and get right down to…

You can’t spend 24 hours in St Petersburg without seeing this statue. St. Petersburg was founded by the Tsar Peter the Great at the beginning of the 18th century. (That’s ol’ Peg Leg Pete’s statue above.)

Don’t let the name confuse you, though! The city is named for St. Peter and not Peter the Great. Tsar Peter was a big fan of European culture and wanted his capital to be like a European city, instead of the more “Russian” old capital, Moscow. So he designed St. Petersburg to be like one of the French or Italian cities he loved so much.

St. Petersburg stayed the capital until the Communist Revolution, at which point the capital was moved back to Moscow. This turned out to be good news for the architecture of the city. Because the Communists weren’t based in St. Petersburg, they didn’t bother to destroy most of the buildings there that were associated with the aristocracy or the tsars. That’s why St Petersburg remains beautiful to this day!

And here we have the Alexander Column outside the Hermitage Museum. The column commemorates the famous Russian victories against Napoleon. You may have read about this time in War and Peace. On the top, it has a statue of an angel holding a cross and squishing a snake with his foot.

Apparently the angel’s face was designed to look like Tsar Alexander I, and the snake is supposed to represent Napoleon. I think if they wanted to make it clear that the snake was supposed to be Napoleon, they should have made it wear a funny hat and put one hand inside its jacket. But snakes don’t really have hands, do they?

This beautiful building is most remarkable for its long curved shape, and it reminded me a bit of St. Peter’s Basilica in Rome, even though this is a Russian Orthodox church and not a Catholic church. Under the Communists, this church was closed of course and renamed Museum of the History of Religion and Atheism. I feel like maybe things would have been better for the Communists if they’d had even a little bit of a sense of humor.

When I enjoyed my 24 hours in St Petersburg, I met a young Russian who told me that young Russians are not very religious, but almost all Russians are superstitious. She took me to the entrance of one of the buildings in the Hermitage Museum complex that features ten giant statues of Atlas, the Titan who holds up the world in Greek mythology.

Then she told me that it was good luck to rub one of their big toes and make a wish. I love making wishes on anything because deep inside I have the delusion that I am a Disney Princess, so this was the most fun thing I did during all my 24 hours in St Petersburg

We still have half our 24 hours in St. Petersburg left, so you’re probably getting hungry. After walking around to your heart’s content, I suggest getting lunch at a restaurant called Marketplace, which is right on the main boulevard of St. Petersburg, Nevsky Prospekt.

I was very nervous about my first attempt to speak Russian, but all I did was get my tray and say, “Business lunch, pazhalsta (please),” and soon I found myself served with a dish of beet salad, a small bowl of squash soup, and a plate of pasta with meat sauce. It was a surprisingly tasty and filling lunch and, no joke, the whole thing cost the equivalent of three dollars. If this was eating in St. Petersburg, sign me up!

If you still feel like you haven’t learned enough about Russian culture, head to the Grand Maket, which is definitely a little off the beaten track for most tourists. If you’re being accompanied by small children during your 24 hours in St Petersburg, they will certainly thank you for taking them here.

This is because the Grand Maket is a giant model replica of the entire massive nation of Russia. If you get the audio guide, you can learn about everything from the history of the roller coaster (a Russian invention) to the Russian lumber industry. More than anything the Grand Maket makes it obvious how huge Russia is. Don’t forget that it’s the biggest country in the world!

It would be impossible for me to tell you about everything I saw at the Grand Maket, so it’s time for…

When I thought of winter in Russia, I usually imagined political dissidents suffering while trying to plant crops out in the frozen wastelands of Siberia. But these snow-covered villages look invited and charming. It needs two things, though. First, a tiny Gordeeva and Grinkov practicing their Olympic routines. Second, a miniature version of Napoleon’s army turning to popsicles.

This is one of the most beautiful things you’ll see during your 24 hours in St Petersburg. I had no idea that you could make such spectacular buildings out of wood. Apparently most of Russia’s wooden churches are located in the northern part of the country.

I think these particular beauties are modeled after the churches in a town called Suzdal. I’m impressed by the architectural creativity on display here, and I’m also impressed that Stalin apparently never got around to burning them down.

My audioguide informed me that lumber is a major industry in Russia, which helps explain where the wood comes from to make the churches. Many of the displays in the Maket have movable parts, so you can actually watch miniature Russian woodchoppers felling miniature Russian trees.

Yes, that’s actually a miniature Disney cruise ship on display here. What impressive brand synergy! Disney’s only actual port of call in Russia is St. Petersburg, but this doesn’t look anything like St. P to me. I think it might be Sochi instead. Perhaps Russia is trying to encourage Disney to expand their service in Russia? That seems a little unlikely in today’s political climate.

The Grand Maket operates on a timer, and every so often, all the lights in the museum will turn off and the exhibits will flex their nighttime lighting powers. Then you have to run around as quickly as possible in order to see what all the regions of Russia look like at night. Just be careful to not accidentally shove a Russian child in your haste!

The Grand Maket is also where Vladimir Putin trains his tiny army of miniature Russians as they prepare for the imminent tank invasion of the United States. There! Now you’ll have nightmares for a week.

As you can see from my graphically fishy picture above, they are little fish kind of like smelt. But don’t worry! I don’t think they actually fish them from the Neva River itself because I’m not sure how pollution-free the Neva is.

I ate these fishy friends at a restaurant called (what else) Koryushka located on Hare Island where the Peter and Paul Fortress is. They were fried, crispy, and salty, and went very well with dilly potatoes and a nice ginger lemonade. You can make reservations online, but make sure to have an early reservation. We have a spectacular cultural evening ahead of us!

Of course you cannot spend even 24 hours in St. Petersburg without visiting the ballet! No one takes ballet more seriously than the Russians. There are several ways to get a ticket. I actually lucked out and had a tour guide offer to buy me a ticket for the ballet free of charge.

But she is no longer working in the industry, so I can’t offer that as a choice. However, you can book a tour to see Swan Lake with this company, including several others on Viator. If you’re on more of a budget, you can ask your hotel for help, or look for tickets at the theater on the day of the show.

I was doubly lucky because not only did I have a Russian to buy a ticket for me, I also got to see Swan Lake at the Alexandrinsky Theater. This theater dates to the early 19th century, and such famous Russian playwrights as Anton Chekhov have had shows performed here. I entertained myself before the show started by gazing at the gorgeous ceilings and red curtains.

It’s very hard to write about a dance especially when you cannot show it, and photography is of course not allowed during the performance. But I was completely floored with how crisp the movements are and how the dancers moved in perfect unison. It reminded me of watching my favorite Russian skaters, the aforementioned Gordeeva and Grinkov. And of course even if you don’t like the ballet, there is always Tchaikovsky’s magical score.

I was staying with a Russian woman and told her that I had gone to see the ballet. She was confused and said she didn’t know what ballet was. I was totally baffled until something clicked in my brain, and I said “Ball-ET”, pronouncing the final T. Her face lit up and she understood immediately.