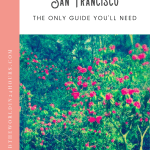 Contents hide
1 How To Get There
2 Where to Stay?
3 What to Pack?
4 Morning: The De Young Museum
5 Afternoon: Explore Golden Gate Park
6 Dinner: In-N-Out

Now, I wish I knew where you lived, Internet Stranger, because I could send you a beautiful box of Rice-aroni, the San Francisco treat. But sadly, I do not, and so I can’t tell you exactly how to get from your home to San Francisco.

But I can tell you that I used a lovely airplane to get from my hometown NYC to San Francisco, and I recommend Expedia for the best way to find the cheapest flight to San Francisco at the best time of day. You can even use Expedia to rent a car so you’ll be all set when you arrive at your destination. (I can’t drive, but if you can, this must be helpful.)

Just click here to start looking for the best possible deals on your flight, so you can head out to your 24 hours in San Francisco ASAP.

I was embarrassingly broke when I spent my 24 hours in San Francisco, so I needed to stay in the cheapest motel I could afford. But I can’t recommend a place like that to my beloved Internet Strangers!

The next time I go to San Francisco, I’m staying at the Cartwright Hotel. It’s located right by Union Square so it’s in a convenient location, it has free wifi, coffee makers, and an airport shuttle, and it might be haunted! What more could you want?

There are so many fabulous museums in San Francisco and Golden Gate Park, but the De Young is possibly my favorite. The museum offers regular free guided tours throughout the day, and free guided museum tours are possibly the best things on this earth after food and mystery novels.

The De Young has excellent temporary exhibitions, but I suggest skipping them if this is your first time at the museum. The regular collection is large enough that you should concentrate on those works. Also, this tip will save you money because you won’t have to pay the extra charge for the temporary exhibition.

My favorite tour was the docent tour of the American Art collection. I loved this tour because we got to learn about the history of the depiction of California in painting. Our docent started by explaining that in the early 19th century, most painters did landscapes of the East Coast, as in this example shown above: “The Village of Catskill” by Thomas Cole.

Then our guide explained to us that painting nature on the East Coast was so early-1800s. By the second half of the 20th century, artists were much more interested in depicting the Western United States as the “New Eden”.

I wonder if artists really used to mix it up with each other about whether or not it was better to paint the East Coast or the West Coast. Maybe it was like the 19th century equivalent of Biggie vs. Tupac.

3) HAVE A LITTLE FUN WITH CONTEMPORARY ART

We finished our tour with this work “Three Machines” by contemporary California artist Wayne Thiebaud, who is famous for his somber colors and serious subject matter. Just kidding! As you can see from my photo above, Thiebaud is known for his brightly colored paintings of sweets.

There is something stereotypically Californian about the almost superficially cheerful nature of his work, but I like this painting anyway. What’s wrong with a work of art that puts a smile on your face?

I recommend spending three hours in the De Young, which gives you enough time to take two guided tours and explore a little of the museum on your own. At this point you will be hungry for some lunch. The De Young Museum has a solid and not too expensive cafe on the ground floor. As a bonus, the walls are glass so you can look out on the Golden Gate Park while you eat. Nosh on something like fresh soba noodles and tea, and then we will be ready to head out into nature!

I’m confident you won’t want to spend 24 hours in San Francisco without seeing the Golden Gate Park. This park has everything: palm trees, a Japanese tea garden, lakes, a Bison Paddock that is actually a paddock that contains real bison, something called a Hippie Hill which of course it does because this is San Francisco, and an Archery Range.

No matter what you are in the mood to do, just check out one of the many clear maps you will find posted around the park and head off! The Park is your oyster, even though oysters may be the only thing you cannot find in this park.

There is literally always an event in this park. No matter when you spend your 24 hours in San Francisco, you’ll be able to find something. I wasn’t even looking for something, and I came across an unidentifiable (at least by me) concert with a whole bunch of people in attendance dressed as fairies.

I’m not trying to be offensive; they were literally wearing glitter and little gauze wings on their backs. If you want to be better prepared than I was, just check this calendar for details.

Don’t you always enjoy a random collection of creepy trees? Fortunately Golden Gate Park has an abundance of them.

I hope those are beavers in the bottom of the picture, but probably they are just rocks.

I was lucky enough to spend 24 hours in San Francisco in the springtime, so the blossoms were especially lovely.

Find this very San Francisco park bench and seranade Jean Scherr with “Where Have All the Flowers Gone?”.  Or you can just wander around and look for Tony Bennett and see if he has located the heart he left in San Francisco.

OK, I didn’t actually run into Mr. Bennett himself, but a girl can dream, can’t she?

After years of hearing my California friends rave about the wonders of an In-N-Out burger, I was equal parts full of East Coast contempt for the burger and full of curiosity about trying it out. Lucky for me, I was able to taste this spectacful beef patty because there is an In-N-Out at Fisherman’s Wharf. I half wanted it to be terrible just because I am sick to death of hearing about how magical THE ALMIGHTY IN-N-OUT BURGER.

Sadly/happily it was not terrible at all. It was meaty and salty and bunny just like you want a hamburger to be. And it only cost 2.05! Well played, California, well played. But I’ll get you next time! *strokes cat while grinning fiendishly*

This was one of the first pictures of food that I ever took, and now I think I would know enough to take the wrapper off the hamburger before taking the picture.

What would you do with 24 hours in San Francisco? What was the deal with the fairy convention? And is the In-N-Out burger a fine treat that only a supervillain could hate? MWAHAHAHA! Also, please leave your thoughts below.

link to 1 Perfect One Day in Cardiff Itinerary

Greetings Internet Stranger and welcome to a perfect one day in Cardiff Itinerary. Regular readers of this blog know that I love to wander into controversy. Which Scandinavian tasting menu is the...

Continue Reading
link to A Perfect 24 Hours in Cardiff, Wales