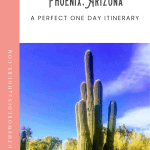 Greetings Internet Stranger and welcome to this 24 hours in Phoenix itinerary. Before my trip to Phoenix, Arizona, I assumed there wouldn’t be that much to do there. All I could associate with Phoenix were senior citizens and a constant, numbing “dry heat”. But little did I know that old people and hot weather can make for an exciting combination.

All the sophisticated elder folk in Phoenix help contribute to the city’s excellent museums and other cultural attractions. And the lack of humidity made my hair look positively amazing. With a 24 hours in Phoenix itinerary, you can explore the world of musical instruments, giant cacti, and the greatest pizza in the Southwest. Just follow me!

When I choose a hotel, I’m looking for a few things: affordability, cleanliness, a convenient location, and cool amenities in that order. The Hilton Garden Inn Phoenix Downtown delivers on all those counts. It has a great location, it has a great restaurant, and it’s in a historic building where Psycho was filmed. (The non-murdery parts of Psycho.) It’s definitely a wonderful choice for your 24 Hours in Phoenix Itinerary.

If you want a great deal on this hotel, click here. And if you’d rather explore deals on over 700 other hotels in Phoenix, click here.

Arizona can get very hot, so don’t forget the sunscreen. My favorite is the Neutrogena spray bottle because it’s so easy to apply. And as a solo traveler, I can actually use it myself on my own back. I just put it in my purse and re-apply throughout the day.

The Musical Instrument Museum, or Madam MIM, as I like to call it, is a feast for both the ears and the eyes. (They also have a nice museum cafe, so I guess it can be called a feast for the tummy as well.) Madam MIM is the largest musical instrument museum in the world. If you don’t believe me, rest assured that it is home to over 13,000 instruments from around 200 countries and territories.

The audio guide included with admission allows you to take a listen to each instrument as you explore the museum! I don’t have time to take you through all 13,000-odd objects, so let’s be satisfied with…

One thing I loved about Madam MIM is that it teaches you about the musical traditions of individual communities, rather than making sweeping statements about whole continents. So the extensive African musical instrument collection is organized by country, not just lumped together under “Africa”.

I was especially affected by the South African musical instrument pictured above, the gumboots. Black South African miners were not allowed to speak while working. So they used their gumboots to communicate with each other. Now gumboot dancing/musical performances can be found all over South Africa. You can check out a fabulous version done by some South African students here.

Not all of the musical instruments in the museum come from old traditions. Some, like this viola, are extremely modern. It was made by a child in Paraguay out of garbage from a landfill. The idea was to take trash and turn it into something useful and beautiful. The idea came from a music teacher named Favio Chavez who helped form the Orchestra of Recycled Instruments of Cateura.

This concept of turning trash into something more valuable is often known as upcycling. I usually associate it with hipster stores where you can buy cufflinks made from beer bottle tops or something. But this viola is much more moving. Music is one of the best ways for humans to bring something beautiful out of something ugly.

So technically this item is not a musical instrument, but it’s too cool for me to not include it. In Malawi, masquerades are important religious rituals. The masked dances are sometimes used to communicate with ancestors and other honored dead. That’s why the masks often represent important, dearly departed members of the community.

But can you tell which honored figure this mask is supposed to represent? That’s right, it’s nothing but the King himself, Mr. Elvis Presley. I have so many questions about this mask. Is there a reason the Malawi would want to honor Elvis? Why does he have a little cross in between his eyes? Is he celebrating Ash Wednesday? Is he nothing but a hound dog, crying all the time? Also, do the Malawi have proof that Elvis is really dead? And if so, would they be willing to share this information with the National Inquirer?

Of course, not all musical traditions are easily confined to one nation. For example, both Indonesia and Malaysia are home to the majestic boat lute. I don’t think you need me to tell you how the boat lute got its name, Internet Stranger! It is obvious! Typically the boat lute is played by a man, which gives me an idea for an exciting motion picture about the world’s first Indonesian female boat lute player.

My one complaint is that I think Madam MIM could have displayed an intact boat lute. This one seems to have a large bird jammed inside. You can even see its feathers at the bottom.

Arizona’s most famous musical son is probably rocker Alice Cooper. One of the docents at Madam MIM told me that Cooper was very active in donating his memorabilia to the exhibit, including one of his special sparkly suits from his tours. But if you really want to show your love for the Music of Arizona, I recommend wandering around blasting Hey Jealousy by local band The Gin Blossoms as loudly as you can. That will win you many friends.

The Musical Instrument Museum is kind of in the middle of nowhere. I don’t drive, so I had to take an Uber here. That’s why I suggest getting a light lunch at the cafe. They even have some local sodas like sarsaparilla or mesquite ginger ale that will make you feel like a true local. I got so into the Arizona spirit that I burst out singing, “Hey Jealouseeeeeeeeeee!” until they kicked me out. I blame the ginger ale.

As much as I loved the Madam MIM, if you see only one cultural attraction in your 24 hours in Phoenix itinerary, let it be the Desert Botanical Garden. Arizona is home to a staggering number of unique plants, and this is one of the best places to see them. I know other botanical gardens have desert exhibits, but this garden is actually located in the Sonoran Desert. You can’t beat that! Just take a rideshare on over from the Musical Instrument Museum and you’ll soon be able to enjoy…

If you only see one plant at the Desert Botanical Garden, let it be the mighty saguaro cactus. This beast can only be found naturally in the Sonoran Desert. It’s so ginormous that birds can make their homes in the cactus, as if it were a tree. They can even live to be 200 years old. (Hey, that’s just starting to sound like a tree to me. Is anyone sure that the saguaro isn’t a tree? I think this might be an important scientific discovery here.)

That’s an easy question, Internet Stranger! It’s without a doubt the Teddy Bear Cactus. Of course it gets its name because it’s brown and fuzzy, just like a teddy bear. But do not try to hug it! I learned this the hard way. The teddy bear cactus is native to Arizona, which means it’s a big fan of The Gin Blossoms.

If you want something more colorful, rest assured that many flowers bloom in the Sonoran Desert. Don’t miss the blueberry taffy. These plants are beautiful on their own. However, they also attract hummingbirds, which makes them even more lovely in my eyes. But don’t let the name fool you! It’s not good to eat the blueberry taffy. I learned this the hard way.

3) Is There Anything Else at the Desert Botanical Garden?

But of course! The Desert Botanical Garden regularly features art installations from notables like Dale Chihuly. When I was there, the sculptures of Japanese-American artist Jun Kaneko were on display. I liked this giant swirly head because it looked like what you might start to hallucinate if you were lost in the desert for several days.

At one point I became convinced that a giant pig-man wearing polka dots was following me. It was then that I realized I needed to get out of the sun and drink some water.

I’m from New York City, and if there’s one thing New Yorkers are famous for, it’s hitting cars while we are crossing the street. But we are also famous for our pizza. Usually I don’t like eating pizza outside of New York City because it never lives up to the pizza in my head. But I had to make an exception for Pizzeria Bianco. This place is often voted the best pizza in the entire country. “Great pizza in Phoenix?” I thought. “That’s impossible! How can all the old people in Phoenix even chew the pizza?” So I needed to go and test the pizza’s deliciousness for myself.

Indeed, the pizza was worth the wait on line. I selected the Sonny Boy because I assumed it was named after James Caan’s character in The Godfather and I was hoping that meant the pizza could say “Bada bing!” The pizza did not say any actual words, but it spoke to me through the magic of mozzarella, salami, and olives. The quality of the ingredients managed to be both personal and strictly business at the same time.

What would you do with a 24 hours in Phoenix itinerary? Have you ever hugged a teddy bear cactus? And what is that polka-dot wearing pig-man doing standing behind you? Please leave your thoughts below!

link to Best Things to Do in Shibuya (Approximately Top 10)

Continue Reading
link to One Day in Hiroshima: A Perfect 24 Hours

Greetings, Internet Stranger and welcome to one day in Hiroshima. Today is a special day in the life of this blogger. Normally I try to cram as many jokes into one itinerary as I possibly can. I...