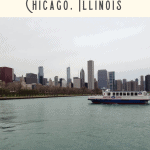 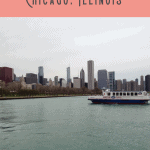 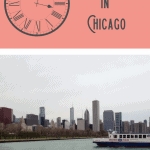 Greetings Internet Stranger and welcome to 24 hours in Chicago! So you want to know what to do with 24 Hours in Chicago? If you’re anything like me, you’ve been dreaming of going to Chicago since you were a little girl for one reason and one reason only: gangsters.

As far back as I can remember I’ve always wanted to be a gangster expert. My favorite movies as a little girl including The Godfather, Goodfellas, and The Untouchables. When the Chicago mass transit system told me I needed to give my subway pass a nickname, I nicknamed it Scarface. Plus, I would never take sides against the family.

Yet Chicago is about so much more than organized crime. A perfect 24 Hours in Chicago starts with some natural history, continues with Great Lakes and exploding tapioca, and finishes with blues by a Legend. The question isn’t what are we going to do, the question is what aren’t we going to do.

Chicago is the third-largest city in the United States, so there’s no shortage of places to stay here. But you want something that’s in a safe, convenient neighborhood. And if you’re anything like me, you want something within your price range.

So I recommend the Hampton Inn Chicago West Loop. It’s near many trendy restaurants like The Girl and the Goat, the staff is friendly and helpful. Plus breakfast is included! What more could you want?

If you want to find a great deal on this hotel, click here. If you are super skeptical of my taste in hotels for some strange reason, and would rather search on your own for great deals on hundreds of hotels in Chicago, just click here.

The Field Museum is the best natural history museum I have ever been to, and I say this as someone who went to the American Museum of Natural History in NYC about two times a year as a child. Basically every exhibit is worth exploring, but you should start your 24 hours in Chicago with the Field Museum’s specialty, the dinosaurs.

The Field Museum’s T-Rex is one of the largest T-Rexes ever found, which is about as large as a thing can be. She’s so impressive that she has her own name (Sue) and her own Wikipedia entry here. I’d like to point out that I still don’t have my own Wikipedia-entry, faithful readers!

Because the museum is expensive, it’s only worth a visit if you spend a large part of the day there. I recommend arriving around nine and staying until at least 2. Having said that, you’re going to want to get lunch at the museum.

The Field Bistro is a perfectly adequate place to get a soup/half sandwich combo before jumping back into the museum. If that sounds like I am damning with faint praise, I kind of am. But you’re not at the Field Museum for the food. You’re there for the dinosaur bones.

If you’re going to see other things in Chicago, I really recommend the Chicago City Pass. It will save you money if you’re going to check out other major attractions like the Shedd or the Art Institute. But if all you’re seeing is the Field Museum, it isn’t worth the money.

Provided it is not too cold (and that is not always provided) Chicago is a wonderful city for walking. It has decades worth of wonderful architecture, but more importantly it is on a Great Lake. There are a grillion things to see and do during your 24 hours in Chicago, but I’ve tried to narrow your options down to the…

Keep your eyes open, Internet Stranger, and check out that view! When you step out of the Field Museum, that is Lake Michigan you are stepping out on to! You should definitely spend at least an hour walking along the wall-less Lake Michigan. The views of the Chicago skyline are just dazzling.

If you get tired (doubtful) or if it gets windy (doubtless), head inland and do some exploring there. You will definitely encounter a melange of gorgeous skyscrapers.

Just kidding! This is actually the entrance to the Van Buren subway Station. But I fooled you for a second, didn’t I?

If you get really bored, you can check out the Adler Planetarium or the Shedd Aquarium, which are right by the Field Museum, but I’m not sure I could do one of those and the Field Museum on the same day. My brain does not have an infinite capacity for fun facts, but perhaps yours does.

It’s pretty easy to get to Chinatown from the Field Museum. Just take the Red Line two stops to Cermac-Chinatown and presto! You are there. I of course walked because I am the original walking fool, but you don’t need to do that to yourself.

Chicago’s Chinatown is not that impressive next to the Chinatowns in New York, San Francisco, Los Angeles, Vancouver, Philadelphia, Montreal…basically any other Chinatown I’ve ever been to. But what it does have is some amazing boba tea.

Boba tea, for those who don’t boba, is a delightful concoction from Taiwan consisting of some combination of tea + fruit + milk + tapioca balls (boba). The fruit and milk are optional, but the tea and boba are not, else how could it deserve the name boba tea?

I suggest a delightful palace of boba called Joy Yee. They have every kind of tea and boba you could want. They even have a kind of slushy base for the tea called a freeze.

When you’re there, try something like the pineapple freeze with strawberry popping boba. These were boba that exploded in my mouth, but in a gentle way. I can’t wait to go back to Joy Yee and try another demented flavor of boba tea that I can’t get here in NYC.

Going to Chicago without hearing a blues performance is like going to New Orleans and not listening to jazz or visiting Nashville and screaming, “LA LA I CAN’T HEAR YOU!” any time you hear a country song. It’s just sick and wrong.

Buddy Guy’s bills itself as the greatest blues club in the country, and it just might be true. That’s because the joint is run by blues legend Buddy Guy himself. He plays the club regularly every January, but he shows up and plays on other nights randomly when he feels like it. If you get lucky, maybe he will show up and play for you!

Buddy Guy was ranked 30th in Rolling Stone’s list of greatest guitarists of all time. Eric Clapton once called him the greatest living guitar player. I’m not sure which of those is a bigger compliment, but I’m going to go with Clapton’s remark.

You should buy your ticket in advance online. The show will probably start at 9:30 but you can arrive at 8 and order dinner. Don’t be skeptical at the idea of blues club dinner because the food was good! Buddy Guy is from Louisiana, so the food is Southern-influenced.

I recommnend you try the BBQ chicken with homemade sauce and spicy fries. Buddy also makes his own beer called Buddy Brew, which is tasty and cheap! My two favorite words in the English language!

Please go to the bathroom when you are at Buddy Guy’s because it is beautifully appointed and there is a friendly attendant who will ply you with hand lotions and whatnot. Be sure to bring a dollar and tip her! If you don’t have cash, Venmo her. I’m really serious! She deserves everything she gets.

I can’t predict who’ll be playing when you go to Buddy Guy’s, but I was there to see a terrific singer named Sheryl Youngblood. She had that kind of spontaneity in her style that makes the blues so exciting, as if she were singing straight from the heart. But the most exciting part of the evening was when Buddy Guy himself stepped out to join her!

Sadly he did not have his guitar with him, but he sang for us some old blues songs and some songs that he improvised on the spot that were definitely not safe for work because they were mostly about sex and drugs. The evening was a complete thrill for me because how often do you get to see a living legend perform? (And I only paid ten dollars for my ticket!)

When you are ready to go home, just step outside because there will be plenty of cabs waiting to take you to your hotel. The perfect end to a perfect 24 hours in Chicago!

That’s a Perfect 24 Hours in Chicago!

What would you do with 24 hours in Chicago? Have you ever seen a blues legend perform live? And is this the first time Chicago has been mistaken for Paris? Please leave your thoughts below!

Note: If you want to know how I put my travel itineraries together, just click here. Keep in mind that while each article is about how to spend 24 hours in a place, that doesn’t mean you should ONLY spend 24 hours in Chicago.