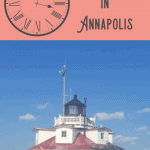 Greetings Internet Stranger! So, you’re interested in spending 24 hours in Annapolis, Maryland? Great choice! Annapolis is the capital of Maryland. It’s the home of the Naval Academy. Most importantly for my purposes, it’s absolutely one of the best possible places to spend 24 hours. I mean, it would be better to spend a full long weekend in Annapolis if you truly want to soak up all the sights.

When I go to Annapolis, I stay at Gibson’s Lodging. It has a perfect location on charming Prince George Street, which is within walking distance of pretty much anything you’d want to see in Annapolis. It has free WiFi, which is important to me, as I am always working when I travel. Working hard to find delicious and beautiful things for you, my dear Internet Strangers.

And speaking of delicious, the breakfast is excellent as well. Finally, compared to many hotels in Annapolis itself, it’s quite affordable.

If you’re looking for an excellent deal on this hotel, click here. If you’d rather explore great deals on other hotels in Annapolis, click here! You’ll have tons of options to choose from, so I guarantee you’ll find something amazing in your price range.

Annapolis is an impressively historical town with many buildings that date back to colonial days. So why not start your 24 hours in Annapolis with a tour in proper costume? That’s why I recommend the 10 AM tour with Colonial Tours Annapolis. This tour was the cutest I have ever been on because the guide, Squire Paul, was dressed in colonial garb, like a lost cast member of Hamilton. He strolled us about Annapolis for two hours, from the State House to the Hammond Harwood House. I soon found out…

As I mentioned earlier, Annapolis is the capital of the state of Maryland. That means the Maryland State House is there, where the State Senate makes all the important decisions affecting Marylanders, like debating the most delicious way to prepare crab, or arguing about which season of The Wire is the best.

Annapolis is the only city to have all the original homes of its signers of the Declaration of Independence intact. You can find their portraits in this super schmancy state legislature chambers and indeed all over Annapolis. If you really want to impress a local, tell them you already know that their names are Chase, Stone, Paca, and Carroll. You might even pass for a local yourself by dropping that kind of knowledge bomb.

If you’re a fan of cravats, don’t miss the colonial portrait room. Many portraits of prominent colonial Marylanders were done by painter Charles Willson Peale and I really admire his ability to find the beauty in stuffy middle-aged rich dudes.

I’m sure every state flag has a story, but I’m equally sure that I usually don’t know what that story is. I wouldn’t recognize my home state of New York’s flag if it bit me. (Although if any state’s flag knew how to bite, I’m sure it would be New York’s. We’re a tough bunch!)

But I digress. Squire Paul enlightened us with the sad history of Maryland’s bifurcated flag. During the Civil War, Maryland was divided. Some of its people supported the Union, and some supported the Confederacy. After the war, to represent unity, both flags were put on the state flag. The red is for the Confederate side and the yellow the Union side, but actually both sides of the flag were originally symbols of Lord Baltimore back in colonial times. In Maryland everything seems to come back to Lord Baltimore. He’s like the Forrest Gump of Maryland.

3) TAKE A TOUR OF THE HAMMOND HARWOOD HOUSE

The Hammond Harwood House is one of the prettiest colonial houses I have ever seen. It was so pretty that Thomas Jefferson liked to sketch it for fun. The HHH was designed for Matthias Hammond to be his home with his newly engaged bride. But sadly Hammond’s fiancee kicked him to the curb for another man after he lost a local election, and Hammond never actually moved into the house.

I can’t respect that decision. If it were me, I would have thrown a ton of parties for all the eligible ladies in Annapolis just to show them what a sweet pad they’d be getting if they married me. Suck on that, fair weather fiancee!

My favorite room in the HHH is the kitchen. I always like seeing the kitchens of historic homes because they are so different from modern kitchens. In Colonial Annapolis they weren’t allowed to have ovens because of the fire hazard.

And above we see the most beautiful object in the house. The HHH is famous for its collection of cabinets by legendary colonial cabinet maker John Shaw. I’m no cabinet making expert, but that scroll on the top does look pretty exquisite to me. But what happens to you if you get to be a super famous cabinet maker? There’s no Cabinet Makers Weekly for you to be featured in. There’s no Oscars for cabinet makers. I guess you just make a lot of money. That’s probably enough reward for most people.

The tour finished up here so Squire Paul could explain why this cute street has such a weird name. Its real name is Pinkney Street, but it was nicknamed Soapsuds Alley because many women on this street took in laundry. It was a perfect place for the tour to end because one of the little homes on this street, the Hogshead, is now a little space where historical re-enacters can show you about different aspects of working/middle-class colonial life.

On the day I visited, there was a woman playing the role of a colonial shopkeeper. She passed around all the materials a shopkeeper might use, like this deer horn.

I imagine this deer horn would come in very handy when the British attack. The colonials were so practical like that.

I don’t need to tell you that seafood is what’s on the menu in Annapolis! So let me share with you my favorite little Annapolis seafood tour. Along the way we’ll fill our bellies with deliciousness and our heads with…

The first stop at Davis Pub is actually my favorite. We got to chow down on a local specialty, the crab pretzel, which is broiled crab dip on a giant pretzel base. This is surely the greatest thing to come out of Maryland since…Cal Ripken Jr? I don’t really know anything else that has come out of Maryland. The crab pretzel is both classy (so much real seafood) and shameful (so much fat!) in a way that I can really get behind. PS I recommend saving half of the crab pretzel for breakfast the next morning.

2) What kinds of seafood can I find in Annapolis?

Answer: ALL the seafood! I’ve been to Annapolis several times, and I’ve feasted on crab, lobster, oyster, and many varieties of fish. But the next food stop is at a restaurant at the Graduate Hotel, formerly the Annapolis, for some of the only seafood I had never tried in Maryland: the mussel.

The chef at this hotel had previously worked at a Michelin star restaurant, so I was expecting to be impressed. Fortunately the mussels were as good as advertised. It was especially fun to soak up the broth with the warm, fresh bread. I like any food that encourages you to play with it.

3) Where can I experience fine dining in Annapolis?

Annapolis isn’t known for being a fine dining destination. That’s why it is a fun treat to stop in at one of the few fine dining restaurants in the area, Harry Browne’s. I was treated to some creamy, decadent lobster bisque. As I ate it, I felt like some big-shot Annapolis powerbroker, organizing a deal to get the colonial guides funnier tri-cornered hats, or whatever it is Annapolis powerbrokers do. I really want to know why cream and shellfish go so well together. Surely some food scientist has figured this out.

Late Afternoon: To the Lighthouse

If you go to Annapolis and don’t spend some time cruising on the water, I will have no choice but to call you a Silly Billy. The only excuse would be if you go to Annapolis in January, but why would you want to do that? All the tourist attractions will be closed and all the seafood will be stuck underneath the ice, so the only thing there will be to do is attend meetings of the Maryland General Assembly.

During the summer, there are many cruises you can take, but I chose this one because it lasts from 4:30-6 and I find that those are precisely the hours when I want to be sitting peacefully on a boat looking at a lighthouse.

You probably don’t think there’s a lot to know about a lighthouses; they’re just some old houses with lights in them. Well, Internet Stranger, allow me to enlighten you.

The Lighthouse is red and white and so cute I want to pinch its chubby cheeks, except I don’t know where lighthouses keep their cheeks.

If you’re going to have dinner in Annapolis, I say go seafood or go home. And O’Leary’s is definitely one of the best places for seafood in Annapolis. In fact, my Uber driver told me that it is usually a place only locals know about…except for the New York Times, which published a great review of the restaurant back at the turn of the century.

It isn’t oyster season during the summer, so if we wanted to try some oysters it would be better to have them cooked. I’m not really used to cooked oysters, so I was pleasantly surprised by these cheesy, garlicky baked fellows you see before you. It’s always nice to learn a new trick for eating oysters out of season. Take that, environmentalists!

Of course it is a crime under Maryland Penal Code Section 28.7 to leave the state without consuming a crab cake. I like the crab cakes at O’Leary’s because there is not too much breading on them, so you can really taste the fresh crab. I tell you, Maryland has almost spoiled me for eating crab anywhere else. Curse you, Marylanders and your abundance of crustaceans and your inability to enunciate your consonants!

For dessert I had this rich creme brulee to balance out all that healthy seafood. It was good, but you’re here for the shellfish and I’ve never met a shellfish dessert that I actually liked. So don’t feel too terrible if you don’t leave room for dessert. Your 24 hours in Annapolis doesn’t really need it.

What would you do with 24 Hours in Annapolis? Why do seafood and dairy taste so good together? And where does an adorable lighthouse keep its cheeks? Please leave your thoughts below!

link to 1 Perfect One Day in Porto Itinerary

Greetings Internet Stranger, and welcome to our one day in Porto itinerary. I bet you thought that we’d done everything there was to do in Portugal’s second city yesterday, right?! Today we’re...

Continue Reading
link to A Perfect 24 Hours in Porto, Portugal

Greetings, Internet Stranger and welcome to 24 hours in Porto, Portugal! If you spend any time traveling around Portugal, the first question any Portuguese person will ask you after your trip is,...