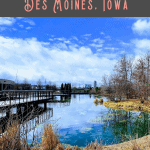 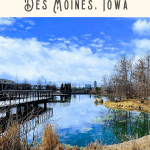 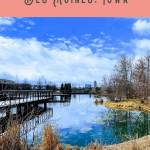 Greetings Internet Stranger! Do you ever feel like you’re surrounded by rude, unfriendly people? Does the barista who makes your coffee routinely misspell your name before throwing your order in your face? Does your boss bark orders at you, and if you don’t comply fast enough, scream, “SCHNELL! SCHNELL!” Wouldn’t you like to take a vacation where you’ll be surrounded by friendly midwesterners? Then spend 24 hours in Des Moines! It’s got that small town feel, but there are still fantastic Des Moines museums and culture, so you’ll find plenty to do!

I highly recommend the Staybridge Suites Des Moines Downtown. It has an extremely convenient location, a fitness center, and a friendly staff. Plus, not only is breakfast included, it’s one of the only hotels I’ve stayed at that includes a light dinner for free on some nights. That’s extremely convenient if you’re in Des Moines on a Monday when a lot of restaurants will be closed.

Some of you Internet Strangers out there might be thinking that the Des Moines Botanical Garden doesn’t count as one of Des Moines museums. But there you’d be wrong. Dead wrong.

First off, a botanical garden is basically a museum for plants. And plants are Nature’s works of art. So the Des Moines Botanical Garden is like Mother Nature’s answer to the Louvre.

The one thing I don’t understand is why it’s called the Greater Des Moines Botanical Garden. Is there a Lesser Des Moines? But even if I can’t answer that question for you, I can answer…

1) When is the Best Time to Visit the Des Moines Botanical Garden?

There’s two parts to the Des Moines Botanical Garden. They have highly technical names. Are you ready for them? There’s the indoor portion and the outdoor portion! If you’re visiting the outdoor portion, it’s probably best to go in the summer. The flowers will be at their peak then. However, I went in the spring time, so I got to enjoy the daffodils in bloom.

And no matter what time of the year you visit you can enjoy the garden’s water features. Plus there’s the views of the famous Des Moines skyline! Truly you ought to give Iowa a try! (Yes, there will be a billion Music Man references in my articles on Iowa. #sorrynotsorry #troubleinrivercity)

2) Can I Visit the Des Moines Botanical Garden if the Weather is Bad?

Mais bien sur! Fortunately the Des Moines Botanical Garden has a fantastic conservatory and indoor garden. It’s just the thing for those frosty Iowa days. (And believe me, the days in Iowa can get frosty.)

The conservatory is home to all kinds of gorgeous plants from orchids to banana trees. You can easily spend an hour or two here, taking in the beautiful blooms. “Is this heaven?” you may ask yourself. “No. It’s Iowa.)

The conservatory is even home to desert plants like cacti, aloe, and agave. As of yet, they don’t make their own tequila, but I think they should look into that. Des Moines Tequila has a lot of commercial potential.

3) Where Can I Eat Near the Des Moines Botanical Garden?

I’ll be generous and give you both a breakfast and a lunch suggestion. For breakfast, I suggest Railroad Bill’s Dining Car. It’s the perfect place for breakfast classics like hash browns and fried eggs. Just get there as early as you can because it’s a small place and the tables fill up fast.

Railroad Bill’s is even attached to an antique store that employs local people with special needs and serves fresh popcorn to customers. I bought this rare Japanese dish there for a much better price than I could have gotten back home. (I’m from New York City.) That’s one reason I suggest spending 24 hours in Des Moines if you’re from a larger, more expensive city. You’ll have an amazing time for much less money.

For lunch, just stop at the Trellis Cafe located in the Des Moines Botanical Garden. They don’t let you eat the plants from the Botanical Garden (I asked), but vegetarians will have an easy time finding delicious soups and salads here.

I recommend the combination plate that comes with soup, salad, and a half sandwich. My asparagus soup and spring vegetable tostada couldn’t have been more seasonal. The only issue was that the tostada was so loaded with yummy veggies that it fell apart in my hands as I tried to pick it up. But I’m used to making giant messes in restaurants, so at this point I’m incapable of feeling shame about it!

This work might look familiar to you because there are other Iago’s Mirrors in museums around the country. It’s made of Murano glass, and according to the docent at the Des Moines Art Center, it’s extremely heavy.

I’m not sure what this work means, though it’s obviously a reference to Iago in Othello and not Iago the parrot in Aladdin. Is Iago’s mirror black because he’s consumed with jealousy and can’t see his true nature? One thing’s for sure, if Iago is using this mirror regularly, he’s probably not drawing his eyeliner straight. You need a better mirror to do that.

Legendary New York artist Jean-Michel Basquiat didn’t title this painting, which means I can say whatever I want about it. Also Basquiat and I were both born in New York City, which means I have the power to read his mind.

What I like about Basquiat’s work is that even though it’s not conventionally beautiful, it’s appealing because there’s so much going on. You want to keep looking at it. He used elements of the kind of graffiti you’d see in NYC at the time, African masks, and his own genius to create his pieces.

The Des Moines Art Center has a smart curating strategy because they seem to try to collect one piece from every major American artist of the 20th century. And Edward Hopper is one of my very favorites!

His most famous piece is Nighthawks, which you can find at the Art Institute in Chicago. I started loving Hopper as a teenager because of the way he captured lonely people in his paintings. I saw myself and my melodramatic teenage isolation in Hopper’s urban loners. When I grew up, I realize that everyone feels that way about the people in Hopper’s paintings, so I was really not as alone as I thought I was! Now I’m not a sad lady eating alone in an automat anymore. Thanks, Hopper!

I was serious when I said the Des Moines Art Center has one piece from every modern American artist. And no collection of 20th century American art can be complete without Georgia O’Keeffe.

This piece both does and doesn’t look like her other works to me. It’s an abstract painting of nature, which was kind of her jam. But it’s not a painting of a giant flower. O’Keeffe was famously annoyed that everyone thought she was painting vaginas when she painted flowers, so maybe she painted this because no one could say it looks like a vagina. I mean, who can really understand the mind of an artist?

The Des Moines Art Center isn’t just full of celebrity artists. It also has hidden gems like this piece from folk artist Bill Traylor. Traylor grew up enslaved on an Alabama plantation. After emancipation, he lived on the street in Alabama’s capital and began to draw pictures of scenes of his life. (Traylor had never been taught to write.)

I love this adorable goat. He has such an expressive face. I wish I could meet him and pat his cute little nose. But I want to know how the painting can both be untitled and called Goat. Is the painting called Goat but the goat is Untitled? My head is spinning a little.

Blink and you’ll miss this cool piece of art by Rachel Sussman. It’s a crack that has been filled in with gold. Sussman is using the Japanese idea of kintsukuroi, fixing something that has been broken in a way that makes it more beautiful. It’s a lovely concept! Although it’s easier to achieve if you are Scrooge McDuck and have access to a ton of gold you can melt any time you break a plate.

I hope I’ve convinced you that there are plenty of great Des Moines museums and restaurants. But Des Moines also shines when it comes to craft beer. When you’re finished at the museum, stop in at the Exile Brewing Company for a tangy and refreshing pint. (Their website is here.) I recommend both their Ruthie, a Not Boring Lager, and their Lemon Trail, if you’re looking for something a bit more adventurous.

Just as there are narrow-minded people out there who think there are no Des Moines museums, there are some people who probably think there’s no Des Moines fine dining. But the dinner you’ll have at Harbinger, a vegetable-focused small plates restaurant is as good as any you’ll find in a larger, more coastal city. Start with one of their cocktails, like Bourbon Acting Like Pho. It definitely tastes like someone crossed a whiskey drink with a spicy Vietnamese soup, which is more delicious than it sounds.

Each dish on the tasting menu featured a different vegetable, but that doesn’t mean the food was vegetarian. Here we have foie gras and beets. I’m used to having foie gras with cherry, but beets add their own special sweetness.

Next there was black trumpet mushroom with sesame and spinach puree. There was no meat in this dish, but the mushroom was so rich that it almost felt like I was eating meat.

The next dish was scallops with sunchoke served two ways. Of course this is the Midwest, so one of those ways was fried. But let this dish be a lesson to people who think you can’t get good food in the Midwest. Iowa has sunchokes now! The gourmet revolution has arrived!

For the final savory course, we had a wonderful wagyu beef with asparagus and ramps. I was visiting Des Moines in April, so this couldn’t have been more seasonal. “It’s not spring without asparagus and ramps, bitch!” as my grandmother always used to say.

There were no vegetables in my dessert, just some perfect for spring rhubarb with a light pannacotta. I told the waiter the only thing that could have made my meal more seasonally appropriate is if they’d put daffodils in the dessert, but apparently that could “poison me” or something. Oh well!

What would you do at the Des Moines museums? Is Edward Hopper the only person who understands your loneliness? And do you think Scrooge McDuck will ever start his own Fancy Gold Plate Repairing Business? Please leave your thoughts below!

Greetings Internet Stranger and welcome to the best artsy places in Chicago! Are you interested in experiencing Chicago's fine art scene? Of course you are, my cultured World Traveler! You want to...

Continue Reading
link to A Perfect 24 Hours in Chicago

Greetings Internet Stranger and welcome to 24 hours in Chicago! So you want to know what to do with 24 Hours in Chicago? If you’re anything like me, you’ve been dreaming of going to Chicago since...